The White House and the Indian-American community are solidly backing the nomination of Neera Tanden as the director of Office of Management and Budget, describing her as the most appropriate candidate to hold the position. "There's one candidate to lead the budget department, and her name is Neera Tanden," White House Press Secretary Jen Psaki told reporters at her daily news conference on Tuesday even as several Republican Senators oppose her nomination, citing her past social media behaviour.

If confirmed by the Senate, 50-year-old Tanden would become the first person of colour to head the federal agency that prepares the annual budget of the US government.

Democrats hold the Senate by a 50-50 margin, and Manchin's announcement last week was seen as devastating for Tanden's chances.

Psaki said Tanden has had 44 meetings with senators of both parties. She's spoken with 15 senators from both parties since Friday. Some of those were repeats of people she had spoken with previously, the press secretary said.

She said Tanden is committed to rolling up her sleeves, having those conversations, answering questions as they come up, reiterating her commitment to working with people across the aisle, and also sharing some of her own experience of working with people of different viewpoints.

"We're going to push. We still think there's a shot, a good shot,” Biden told reporters at the White House.

The Senate Budget Committee has scheduled a vote on Tanden's nomination on Wednesday, while the Senate Homeland Security and Governmental Affairs Committee is all set to take up the vote a day later on Thursday.

The Republican senators have alleged that Tanden was sharply critical of their leadership in the past and she has now deleted more than thousands of such tweets.

A delay in her confirmation process would have repercussions on the preparation and presentation of the annual budget.

Coming out in support of Tanden, US Chamber of Commerce said she is well-qualified to lead OMB and brings an established track record of engagement with the business community.

Indian Americans from across the country have joined the YesNeera Twitter campaign organised by South Asians for Biden.

“She's a trailblazer for women in government policy despite the odds. We cannot let double standards derail the chance of the first WOC (women of colour) in this role,” she said.

“The Biden-Harris administration thoughtfully selected the most diverse cabinet and senior staff in American history to guide America through multiple converging crises. We are particularly heartened by the inclusion of outstanding South Asian public servants, including Ms Tanden and Dr Murthy, and we strongly urge the US Senate to confirm them,” she said.

Tanden was a key architect of the Affordable Care Act, which expanded healthcare to millions of American families, and has served as a senior policy advisor to Democratic presidential campaigns and administrations.

On the Senate floor, Senator John Cornyn, who co-chairs the Senate Indian Caucus, urged Biden to withdraw the nomination of Tanden.

"My friendly advice to President Biden is to withdraw Neera Tanden's nomination and select someone, who at the very least, has not promoted wild conspiracy theories and openly bashed people on both sides of the aisle that she happens to disagree with," he said.

Joining the YesNeera social media campaign, Olympian and five-time World Champion figure skater Michelle Kwan tweeted that Tanden is qualified to lead the OMB and if confirmed, will be the first woman of colour and Asian American Pacific Islanders to do so. 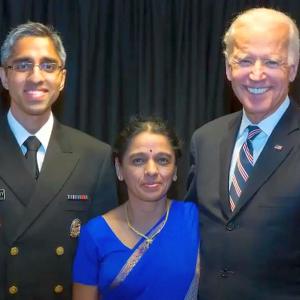