Biden apologises after calling scribe 'Stupid son of a b****'

United States President Joe Biden who was caught on live microphone using a vulgar epithet for a reporter during a White House event on Monday called up to apologize for the comment, according to the journalist. 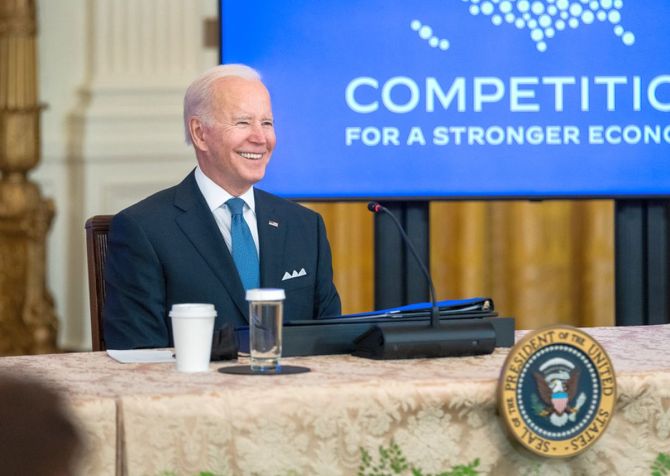 IMAGE: Previously too Joe Biden has chided reporters for asking about subjects that he dislikes. Photograph: @POTUS/Twitter

During an event on Monday evening, reporter Peter Doocy attempted to ask Biden whether inflation was a political liability for him to which the President responded by calling him a "stupid son of a bitch," reported Fox News.

Appearing on Fox TV, Doocy said that Biden reached out to him "within about an hour of that exchange."

"He said 'It's nothing personal, pal,'" Doocy said.

"And we went back and forth, and we were talking about just kind of moving forward, and I made sure to tell him that I'm always gonna try to ask something different than what everybody else is asking. And he said, 'You got to.' And that's a quote from the president, so I'll keep doing it," the US media network said.

"I don't need anybody to apologize to me. He can call me whatever he wants as long as it gets him talking!" Doocy said.

At the White House event after Biden finished his prepared remarks, several reporters started shouting questions at the President. It was then that Doocy shouted out his question on whether Biden thought "inflation will be a political liability ahead of the midterms?"

"That's a great asset. More inflation? What a stupid son of a bitch," Biden said into a hot microphone.

The moment was also caught on camera.

Interestingly, the White House put out an official transcript of the entire event and also included the President's epithet.

Previously too Biden has chided reporters for asking about subjects that he dislikes.

Last week, Biden attacked a Fox News reporter after she asked, "Why are you waiting on (Russian President Vladimir) Putin to make the first move, sir?" Biden replied, "What a stupid question."