Source: ANI
May 05, 2010 13:35 IST
Victims of the 1984 Bhopal gas tragedy, described as one of the world's worst-ever industrial disasters, have filed a Right to Information petition with the prime minister's office in New Delhi.

The RTI plea wants to know whether the Central government took into consideration the disaster of gas leak at the Union Carbide plant in Bhopal in 1984 while drafting the Civil Nuclear Liability Bill with the United States.

It may be recalled that over 50 victims of the Bhopal gas tragedy walked 800 kilometres on foot from Bhopal to New Delhi and met the prime minister in 2008. The government had then their assured them that an empowered commission would be constituted to address their grievances and it would initiate remedial measures.

Citing the assurance of 2008, the protestors alleged that nothing has been done so far.

"When we came on a foot march to New Delhi to meet the prime minister in 2008, at that time the government assured us that they would form an empowered commission to address the demands of victims like removal of hazardous waste, treatment of contaminated water, pensions to widows etc among others but we have not received anything," said Zakiya, a victim.

The protestors also questioned the amount included in the Nuclear Liability Bill. The bill proposes a liability cap of $300 million on the supplier in case of a mishap.

"They want to find out how the cap was fixed because this is even less than what the Bhopalis were paid as compensation and which was not sufficient enough to meet their medical expenses for five years," noted Satinath Sarangi, an activist of the Bhopal Group for Information and Action.

In the early hours of December 3, 1984, nearly 40 metric tonnes of toxic methyl isocyanate gas leaked into the atmosphere and was carried by wind to surrounding slums.

The government says nearly 3,500 people died in the disaster. Rights activists, however, claim that 25,000 people have died so far. 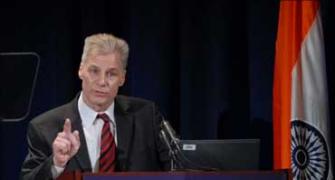