The recent riots in Bengaluru were "pre-planned and organised" and it was "undoubtedly communally motivated", the Citizens for Democracy in its fact finding report submitted to chief minister B S Yediyurappa on Friday said. 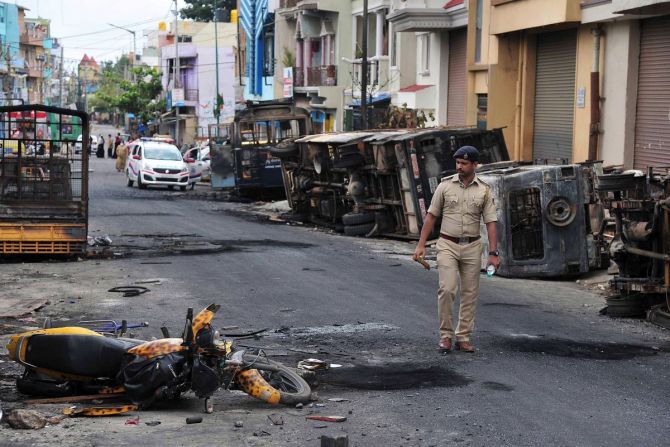 It said the mob during the riots on August 11 night had specifically targeted certain prominent Hindus in the area, and the entire incident qualifies to be a "riot against the state" with the motive of "reducing the faith of common people in the state".

Citizens for Democracy is a platform of responsible citizens that claims to be committed to democratic values, safety and security of the citizens of India.

Started in 2011, it has conducted various seminars, campaigns on topics of national and social importance.

Citizens for Democracy in a statement said the fact finding committee comprising prominent representatives of the society was formed to look into recent violence, as it is imperative to survey the incident neutrally without any bias or vested political interests with a sole commitment towards truth.

Committee members led by Madan Gopal submitted the report to Yediyurappa on Friday.

Noting that it is estimated that nearly 36 government vehicles, nearly 300 private vehicles and many houses were destroyed in the violence, the committee has said the damage could be estimated to be nearly Rs 10 to 15 crores.

It could be seen from the FIRs and certain interactions with the victims, that local people were also involved in carrying out this riot, the committee said, "it is of the opinion that the locals were not only involved in execution but were also aware about it in advance."

"Despite attempts being made to project the same as political rivalry, it was undoubtedly communally motivated.

The panel is of the opinion that based on the kind of houses and people targeted, the motive of the riots could also be fear mongering so as to change the demography and turn the area into a Muslim majority one," it said.

It was also of the view that SDPI and PFI were involved in planning and execution of this incident.

The violence in D J Halli and adjoining areas on August 11 night was unleashed by hundreds of people over an inflammatory social media post allegedly put out by P Naveen, a relative of Pulakeshinagar Congress MLA R Akhanda Srinivasa Murthy.

The MLAs residence and a police station at D J Halli were torched by rioters who also set many police and private vehicles afire, and looted the belongings of the legislator and his sister.

More than 300 people have been arrested in connection with the violence and investigation is on.

Also retired judge Justice H S Kempanna has been appointed as the "Claim Commissioner" for assessment of damages caused during violence and to recover the costs from the culprits.

All the costs that have been incurred by the state and individuals have to be recovered by attaching the property of the rioters, the committee in its recommendations said.

The pattern of the riots is similar to that of Delhi and Sweden and therefore it is imperative for the state to investigate the incident holistically and not consider them to be isolated and local.

Funding received by individuals and religious extremist organisations should be continuously monitored by involving NIA, while potential areas that might face such communal tensions must be identified by the police in advance, it suggested.

Establishing a cyber dome to ensure social media is not used for hate mongering, strengthening of intelligence generation mechanisms, are among the other recommendations made by the committee.