The Trinamool Congress on Saturday launched its slogan for the upcoming assembly elections -- 'Bangla Nijer Meyekei Chaye', adding to the shrill insider vs outsider debate while portraying Chief Minister Mamata Banerjee as the daughter of Bengal. 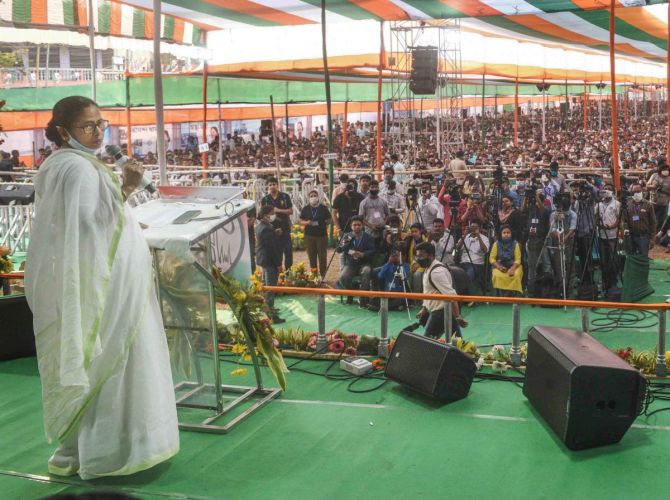 The slogan, which translates to 'Bengal wants its own daughter', with Banerjee's photo was put up on hoardings across Kolkata as the state's ruling party officially launched it from its headquarters off EM Bypass.

"The people of the state want their own daughter who has been by their side for the last several years as their chief minister. We don't want outsiders to call the shots in Bengal," TMC secretary-general Partha Chatterjee said.

The Trinamool Congress is engaged in a bitter political fight with the BJP, pitching the opposition party's leaders as outsiders who are on 'election tourism' to the state.

"The upcoming election is not a big factor for the Trinamool Congress. The entire country is watching how the Constitution can be protected and the outcome of the polls will prove that," TMC's Rajya Sabha MP Subrata Bakshi said.

He said the chief minister has already a submitted a report card of the work done in the last ten years to the people of the state.

"Which state has done so much? None," Bakshi added.

State Panchayat Minister Subrata Mukherjee said that while other parties are struggling to find a chief ministerial face, the Trinamool Congress has Banerjee who knows the pulse of the people of Bengal.

Mukherjee said she knows how to protect the women.

Banerjee also has a soulful connection with rural Bengal and has built 34 lakh houses in the villages while providing electricity to 96 lakh households, he said.

The party's slogan of 'Bodla Noy Bodol Chai', meaning 'don't want revenge but change', ahead of the 2011 polls turned out to be crucial in reaching out to the masses who toppled the 34 years of Left rule in Bengal.

The slogan of 'Chup Chap Fuley Chap' (vote for TMC in silence) during the Left rule is also considered iconic.

However, 'Ma, Mati, Manush' -- the slogan Banerjee gave during the land agitation of the mid-2000s became the ideology of the party, helping it win rural Bengal along with the urban areas, election after election.