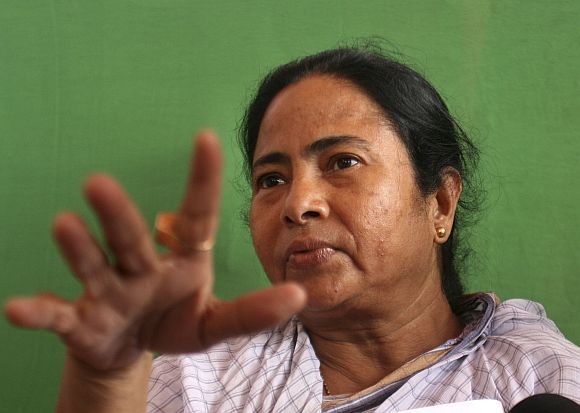 West Bengal Chief Minister Mamata Banerjee is not ready to give credit to Narendra Modi for development work in Gujarat and feels her own model is much better and has paid good dividends. In the 'development-versus-development' debate, she says there is a "huge difference" between the models pursued by her and Modi because of circumstances.

"In spite of overcoming all these, we have been on the path of development," added Mamata who became the chief minister in August 2011. She was responding when asked if she sees a difference between the models of development being pursued by Modi and her own.

Seeking to justify how her model of development was better, the Trinamool Congress leader said, "Let me talk facts and show how the two states (West Bengal and Gujarat) cannot be compared." She suggested that Gujarat has had sustained development without facing any problems while West Bengal "had to rise from bottom upwards" as it had been "ruined for over 34 years by the Communists".

In West Bengal, she said, every parameter had gone down. There was "flight of capital" from the state, 50,000 factories had been closed down and one crore people had been rendered unemployed. "This was the story of West Bengal when my government took over. Other states have had sustained development for many decades," she contended.

"What West Bengal is doing today, India must do tomorrow. These are not hollow words," Mamata insisted. To buttress her point, the chief minister listed "some concrete examples" like setting up of fair price medicine shops, web-based procurement policy of medicines and 'Kanya Shree' scheme.

"My state also now has a PPP policy, an IT policy, a Textile policy. We have done more in 34 months than what the Communists have done in 34 years," she maintained. These schemes, she said, could be replicated by other states for their betterment. Mamata said that before she came to power, the work culture in her state had been ruined.

"When my government took over, half the man days lost in India were from Bengal. Between 2008 and 2011, 70 lakh man days were lost through strikes. We brought that figure down to 5,200. And this year it is nil.

"Compared with this, states such as Gujarat have always had a good work culture. But we have had to change the full attitude. “So before you start comparing Bengal to other states, it is important to understand this. We have done all this and more and that is why people are putting their faith in us, election after election," she said.

Talking about the initiatives by her government as well as the results they have borne, Mamata said, "You will be happy to know that in MSME, the growth in Bengal has been 105 percent. Karnataka is 48 per cent, Gujarat is in the 20s."

The said that the tax collection in West Bengal has been doubled from Rs 20,000 crore in the last three years without a single tax being raised. "I can challenge and say that Bengal's new Industrial Policy document has a detailed incentive package which is better than any other state," Mamata added.

Ajay Kaul in New Delhi
© Copyright 2021 PTI. All rights reserved. Republication or redistribution of PTI content, including by framing or similar means, is expressly prohibited without the prior written consent.