Following a debacle in the West Bengal assembly election, state Congress president Adhir Ranjan Chowdhury has said he does not want to contest any future election in an alliance which has the Indian Secular Front (ISF) as a partner. The Congress leader said he has asked the Left Front not to ally with the ISF as he had reservations.

The Samyukta Morcha of the Congress, Left and the ISF failed to make an impact on the electorate.

The alliance won just one seat and that went to the party floated by an Islamic cleric in January.

"I will never want the ISF to be part of an alliance where we are also present," Chowdhury, also the leader of the Congress party in the Lok Sabha, told PTI over the phone.

He asserted his party never went to form an alliance with the ISF and it was the Left, which chose to tie up with the party.

"I had asked them not to do so, but they (Left parties) said that they had made a commitment. And now you can see the result," the Congress leader said.

Out of the constituents of the Samyukta Morcha, the Congress and the Left parties have drawn a blank in the recently concluded assembly elections, while the ISF managed to win just a single seat.

Since the Congress already had an understanding with the Left, the Samyukta Morcha was formed, Chowdhury said.

The Morcha's debacle was 'imminent because the people of West Bengal just refused to accept the alliance', he said.

In the 2016 assembly elections, the Congress-Left alliance had bagged 76 seats, while the Bharatiya Janata Party could only manage to win three seats.

This year, the saffron party bagged 77 out of the 292 seats which went to the polls.

The Congress lost its traditional vote base in the two districts of Malda and Murshidabad in this election, Chowdhury said.

People generally vote for parties or alliances, not candidates, and 'this time they have refused the Morcha', the veteran Congress leader said.

The Congress had won 14 out of the 22 assembly constituencies in Murshidabad in the 2016 elections, while Left Front had won four.

The Trinamool Congress had to be satisfied with just four seats then.

This year, the TMC won 17 seats, while the BJP bagged three. Polling did not take place in two constituencies, due to the death of candidates.

In Malda, the Congress had bagged eight out of 12 constituencies in 2016, while the BJP had got one.

The Left Front had won two seats while one seat went to an independent candidate.

This year, out of the 12 seats in Malda district, the 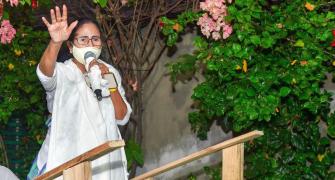 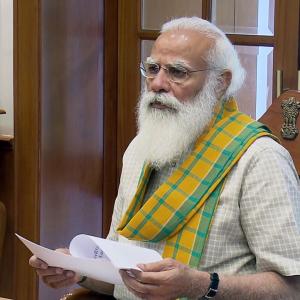