The West Bengal on Thursday became the sixth state to pass a resolution against the three contentious farm laws enacted by the Centre, even as the opposition Bharatiya Janata Party staged a walkout from the assembly amid 'Jai Shri Ram' slogans. State Parliamentary Affairs Minister Partha Chatterjee moved the resolution under rule 169 urging the centre that the three laws- the Farmers (Empowerment and Protection) Agreement on Price Assurance and Farm Services Act,2020; the Farmers' Produce Trade and Commerce (Promotion and Facilitation) Act, 2020; and the Essential Commodities (Amendment) Act, 2020- be repealed.

West Bengal assembly is the sixth to pass such a resolution after Punjab, Rajasthan, Chattisgarh, Delhi and Kerala.

While the first three are ruled by the Congress, Aam Aadmi Party is in power io Delhi and the Left Front is ruling Kerala.

While speaking on the resolution, Chief Minister Mamata Banerjee said that the centre should either take back the new laws or step down.

The Communist Party of India-Marxist and the Congress supported the resolution, but demanded that the state government withdraw similar laws it had passed a few years back.

Rule 169 of the assembly empowers the state government to pilot a resolution in the house.

Speaking on the resolution amid vociferous protests by the BJP lawmakers, Banerjee demanded that Prime Minister Narendra Modi convene an all-party meeting to discuss the process of withdrawal of the new agri laws.

The assembly witnessed unruly scenes after the resolution was moved, with BJP MLAs rushing to the well of the house, claiming the TMC government has launched a 'misinformation' campaign against the farm legislations.

"We oppose the anti-farmer laws. We demand there immediate withdrawal. Either the centre should withdraw the laws or step down," the chief minister said.

Banerjee said the union government, which has in the past, waived corporate loans, should also extend the same benefit to farmers.

She also claimed the Delhi police 'mishandled' the tractor rally by farmers which resulted in the situation going out of hand on the Republic Day.

"Delhi police is to be blamed for that. What was the Delhi police doing? It was a complete intelligence failure. We will not tolerate farmers being branded as traitors. They are the assets of this nation," she said.

Banerjee said the BJP pushed the farm laws in Parliament using its 'brute force' due to majority numbers and urged the centre to repeal the legislations.

"BJP always maligns every agitation as terrorist activity. The laws are totally anti-farmer. They pushed it (in Parliament) using brute force," the Trinamool Congress supremo said.

Banerjee appealed to the Congress and the Left Front to keep aside ideological differences and come together in support of the farmers.

Senior Congress leader and MLA Sukhbilas Barma, although supported the resolution, said that the TMC government does not have any moral authority to bring a resolution against the centre's new farm laws as the state administration too had passed similar laws a few years back.

"Unless the TMC government withdraws similar laws it had passed a few years back, there is no meaning in bringing a resolution against the centre's new farm laws. The resolution that we had submitted had those points but the state administration was not willing to accept it," he said.

Echoing similar views, Sujan Chakarborty, whose party also supported the resolution, said the state government before pointing fingers at others should set its own house in order.

He moved six amendments on the resolution, but only one was admitted.

Later talking to reporters, Partha Chatterjee dismissed the Congress and the CPI-M allegations against the TMC government for passing similar agri laws, saying 'our legislations ensured MSP for farmers and protected their rights'.

Tigga accused the state government of misleading the people of West Bengal on farm laws.

"The farm laws have been supported by the farmers of the state. The TMC along with Left and Congress are opposing it to score brownie points ahead of the elections," he said. 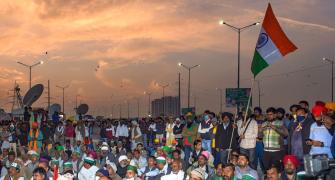