Believe it or not: Shinde camp paid Rs 70 lakh for Guwahati hotel stay

Maharashtra Chief Minister Eknath Shinde and the rebel Shiv Sena MLAs who had camped at a Guwahati luxury hotel for eight days have cleared their bills before they checked out on Wednesday, a hotel official said. 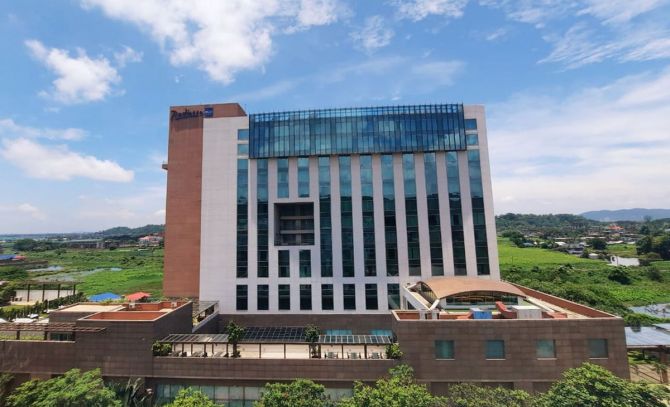 Though the hotel officials are tight-lipped on the total bill, sources said Rs 68-70 lakh were paid for their stay in the upscale Radisson Blu hotel located at Gotanagar near Jalukbari.

A total 70 rooms in different floors of the hotel were booked for the Maharashtra MLAs and their associates.

The hotel had closed its restaurants, banquets and other facilities for the non-resident guests from June 22 to June 29, the period of their stay.

"The Maharashtra legislators stayed in the hotel as normal guests. They cleared the bills before leaving. There is no money pending," a senior official of the hotel told PTI on condition of anonymity.

The official, however, declined to share the amount billed but said the lawmakers had stayed 'in a mix of superior and deluxe category rooms'.

According to the Radisson Blu's website the tariffs of different types of rooms in its Guwahati property are dynamic and vary almost every day.

Sources said that usually the rent for superior rooms is around Rs 7,500 and Rs 8,500 for deluxe ones.

After discounts and taxes the figure is estimated to be around Rs 68 lakh.

The are a few superior rooms and around 55 deluxe rooms in the hotel.

The total food bill is believed to be around Rs 22 lakh for the rebel MLAs.

Asked if the guests availed any other paid services, the hotel official said, "They used only those facilities which are available as complimentary in the room rent. No other chargeable utility like the spa was availed by them."

The dissident Shiv Sena legislators and some Independent MLAs led by Shinde had stayed in the hotel in Guwahati, about 2,700 km away from Mumbai, since the early morning of June 22 in an attempt to topple the Maha Vikas Aghadi (MVA) government in Maharashtra.

They left for Goa on Wednesday.

Radisson Blu Guwahati is the first five-star hotel in the entire Northeast.

It is located on the side of the picturesque Deepor Beel lake and is next to the Gauhati University and Assam Engineering College campuses.

Trideep Lahkar
© Copyright 2022 PTI. All rights reserved. Republication or redistribution of PTI content, including by framing or similar means, is expressly prohibited without the prior written consent.