Two officials of Indian High Commission in Pakistan, who were released by the authorities in Islamabad on Monday after a day-long arrest, were thrashed and forced to confess that "they were involved in an accident", according to sources. 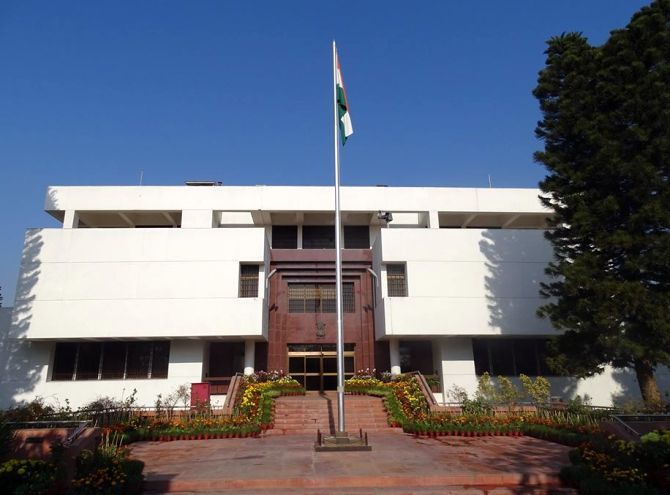 Two Indian staffers who are working as drivers in the Indian High Commission were picked up by around 15 to 16 armed persons at around 8:30-45 hours from a petrol station close to the High Commission, according to sources.

They were then blindfolded with a rucksack over their heads and handcuffed.

The armed men took the Indian High Commission staffers to an unknown destination.

"They were interrogated till around 1400 hours, during which period they were repeatedly beaten with rods/wooden sticks, punches, and made to drink filthy water etc. They were interrogated regarding the specific role and function of all High Commission officials down to the lowest staff," said sources.

During the interrogation, they were repeatedly threatened that this is how the other members of the High Commission would be treated as well in future.

Following the investigation, the drivers were then taken for a medical checkup where they were also injected with what was claimed to be a tetanus shot.

On Monday, at around 2100 hours they were handed back to the High Commission. Though they were able to walk, they carried extensive injury marks to their neck, face, thighs and rear, indicating extensive manhandling.

No life-threatening injuries have been detected so far, said sources.

India had earlier in the day summoned Pakistan's Charge d'affaires Syed Haider Shah and issued a demarche over the reported arrest of two officials in Islamabad.

Pakistan was asked to return the two officials along with the official car to the High Commission immediately.

The Indian High Commission in Pakistan had said yesterday that two of its officials were missing and the matter had been taken up with Islamabad.

The incident took place days after two Pakistani officials at Pakistani High Commission in New Delhi were deported for espionage activities in India.

India on Tuesday summoned Charge d' Affaires of Pakistan High Commission Haider Shah and lodged a strong protest with him over the "abduction and torture" of two officials of the Indian mission in Islamabad by Pakistani agencies.

The external affairs ministry said these two officials of the Indian high commission were "forcibly abducted" by Pakistani agencies on Monday and kept in "illegal custody" for more than 10 hours.

The two officials were detained in Islamabadon Monday in a case of alleged "hit and run" and were released after over 10 hours following a blunt message by India to Islamabad that the duo must be freed immediately.

In a media statement, the MEA said the Indian officials were subjected to "interrogation, torture and physical assault resulting in grievous injuries to them".

"They were released only after strong intervention by the high commission of India in Islamabad and the MEA in Delhi," it said.

"They were video-graphed and coerced to accept a litany of fictitious allegations and concocted charges. The vehicle of the High Commission, in which they were travelling, was extensively damaged," the MEA said.

It said India strongly condemned and deplored the action of the Pakistani authorities against the duo.

"This premeditated, grave and provocative action on the part of the Pakistani authorities, preceded by intensified surveillance, harassment and intimidation of high commission personnel over the past several days, was designed to obstruct and disrupt the normal functioning of the Indian High Commission in Islamabad," the MEA said.

It said the attempt by Pakistani authorities to levy "false accusations and concocted charges" on the officials is rejected "in entirety".

"These actions by Pakistan not only constitute an egregious violation of the Vienna Convention on Diplomatic Relations of 1961 as also the Code of Conduct for treatment of Diplomatic/Consular personnel," it said.