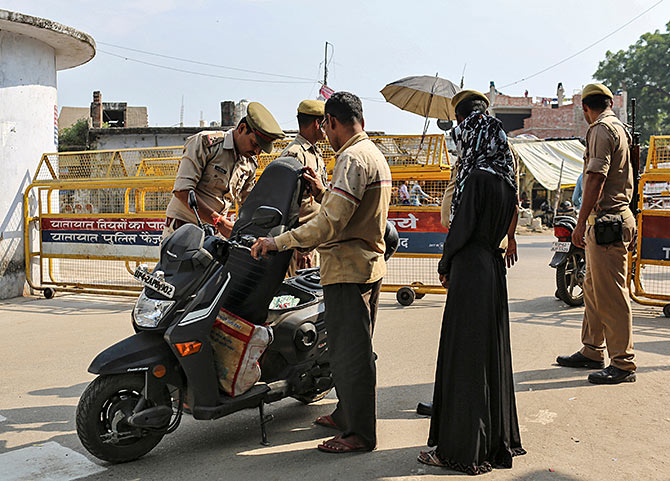 IMAGE: Policemen check a scooter at a security barricade on the road leading to Ayodhya. Photograph: Danish Siddiqui/Reuters

The Centre has rushed around 4,000 paramilitary personnel to Uttar Pradesh while the Railway police cancelled leave of its force and stepped up vigil at 78 major stations and on trains as part of its security preparedness ahead of Supreme Court's Ayodhya verdict expected next week.

As the Ministry of Home Affairs (MHA) on Thursday sent a general advisory to all the states and Union territories asking them to deploy adequate security personnel at all sensitive places, political leaders made fresh calls to people not to indulge in making provocative remarks or spreading rumours.

Prime Minister Narendra Modi on Wednesday discussed the Ayodhya issue with his council of ministers and asked them to refrain from making unnecessary statements on the subject and maintain harmony in the country, according to sources.

The apex court is likely to deliver its verdict in the Ram Janmabhoomi-Babri Masjid land dispute case before Chief Justice of India (CJI) Ranjan Gogoi retires on November 17. Justice Gogoi headed the five-judge Constitution bench that heard the case for several weeks.

As part of goodwill measures, meetings were being held by police with members of Hindu and Muslim communities with an appeal to them to maintain calm.

"All of them have agreed to abide and respect the judgement," Bengaluru Police Commissioner Bhaskar Rao told reporters.

The railway police issued a seven-page advisory to all its zones giving them a slew of instructions on security preparedness, sources said.

The advisory from the Railway Protection Force (RPF) said leave of all its personnel have been cancelled and they have been instructed to be engaged in escorting trains.

The advisory, which covers aspects like security at platforms, railway stations, yard, parking space, bridges and tunnels as well as production units and workshops, has earmarked all potential hot-spots which could either be a site for any violence or could be used to hide explosives.

The RPF advisory said a close watch should be kept on all religious structures near railway stations or within its premises as they may become 'flash points' in case tempers run high. It has also instructed caretakers of such structures not to leave them unguarded.

It has identified around 78 major stations with high footfall including stations in Mumbai, Delhi, Maharashtra and UP where the presence of RPF personnel have been increased.

The advisory also rescinded an earlier order which allowed stations to keep their lighting to around 30 per cent to save electricity when there is no train at the station, instructing all zones to keep lighting at 100 per cent at all times instead.

The advisory has also issued strict operational guidelines to be followed in case a mob is sighted in railway premises -- presence of quick response teams, sealing of entry and exit points and use of CCTV cameras monitored by skilled personnel -- to maximise security of railway premises.

It also asked zones to ensure there is no leakage of information about VVIP or military movement during this time.

At other stations too, the visible presence of RPF personnel have been made.

All zones have been asked to repair their baggage scanners, CCTV cameras and keep a constant watch on crowded areas like lobbies and waiting areas.

Zones have also been asked to conduct anti-sabotage drives of all empty rakes which should be locked and secured after the operations as they can be used as hiding places for anti-social elements.

"The decision of the judiciary is paramount. I would like to urge the public that people should not indulge in any provocation and social harmony should not be disturbed," Rajasthan Chief Minister Ashok Gehlot told reporters in Jaipur.

The Vishwa Hindu Parishad(VHP), meanwhile, has stopped stone carving work for the construction of a Ram Temple in Ayodhya for the first time since 1990.

He said the decision to stop the carving was taken by top leaders of the VHP, a Hindu right-wing organization that has been at the forefront of the movement demanding the construction of a 'grand temple' dedicated to Lord Ram at the site of the demolished Babri Masjid.