Faced with high-speed wind and swelling sea, the ill-fated barge Pappa-305, with 261 crew onboard, lost anchors and smashed into an unmanned platform before sinking in the Arabian Sea after its captain ignored weather warnings and chose not to move the vessel away from the path of severe cyclonic storm Tauktae, a survivor recounted. 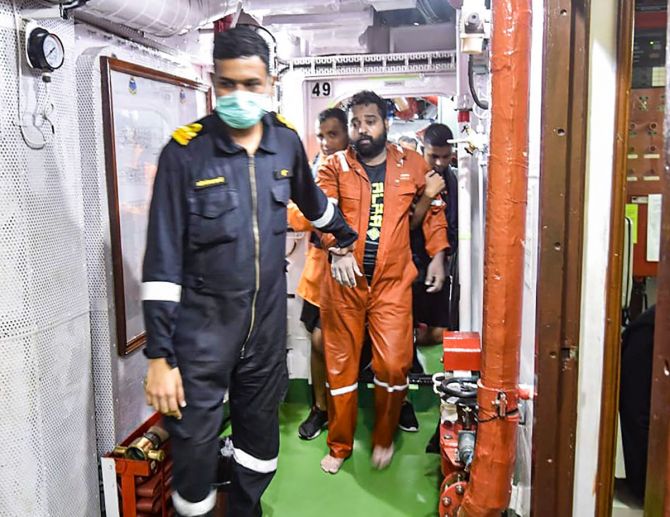 IMAGE: Rescued crew members of the barge P305, being brought at an Indian Naval Ship off the Mumbai coast. Photograph: Indian Navy via PTI Photo

A person, rescued from one of the three barges that adrifted after being smashed by the severe cyclone, said that while other barges started to move out of the path of the cyclone when they received warning, the Master of P-305 hardly moved 200 metres from its location near Heera oilfield in the Arabian Sea.

P-305 probably had very little remaining work at the ONGC platform and wanted to remain anchored near the worksite rather than moving towards shore and return after a few days, the person, who did not wish to be named, said.

But, the cyclone broke all its anchors and pushed it towards the ONGC platform, he said.

An unsigned note from Afcons, the private contract which had deployed the barge for performance of a contract it had got from ONGC, said all its vessels were on May 14 advised to secure their respective work locations and move to safe locations at the earliest.

The master of P-305 chose to move 200 metres away from the Heera platform where it was working and remain at the location, the note sent to ONGC said.

This, it said, was based on his assessment that it was a safe location since the maximum predicted wind speed was only 40 knots and his location was 120 nautical miles away from the eye of the tropical storm.

But, the weather conditions deteriorated rapidly from the evening of May 16, reaching worse than predicted levels a day later.

This sudden deterioration of weather left no time at all for any further action to be taken by the master of the vessel, it said.

Sources said the master of the P-305 was one of the 26 missing from the barge.

Afcons had chartered the vessel from Durmast.

Durmast, the note said, is the owner and the responsibility for marine operations rests with it.

Cyclone Tauktae made landfall on Monday night on the Gujarat coast, which is dotted with oil and gas installations.

While the offshore has fields producing oil and gas, the coast houses two big refineries and some of the busiest ports.

While 6,961 persons on 337 offshore wells, platforms and other oil and gas installations that dot the west coast stayed safe, five vessels encountered mechanical faults, putting at risk 714 personnel on board.

Three barges and an anchor handling boat deployed by Afcons for the project it was doing for Oil and Natural Gas Corporation (ONGC), and a drillship of a state-owned firm lost anchors and drifted away.

While 440 persons on two barges and the drillship were brought to safety, barge P-305 carrying 261 personnel sank.

Naval and Coast Guard vessels and aircraft scoured the waters off the west coast to look for the missing.

The sources said based on the weather warning, ONGC, which operates the giant Mumbai High oil and gas field and other fields in the region, activated its emergency response system and issued instructions to all installations to take action.

ONGC's installations, which include giant platforms that house hundreds of staff, wells, drillships and support vessels, took appropriate actions like staying at safe mode or moving to a safe location, they said.

ONGC's drillship Sagar Bhushan was required to stay at its position as per the standard operating procedure, but its anchors gave away and it developed a mechanical fault in the steering system.

All its 101 persons as also those aboard Afcons' two barges were rescued to safety.