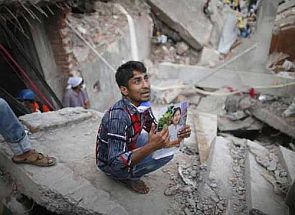 The death toll in the worst building collapse in the history of Bangladesh has risen to nearly 400, even as the fugitive owner of the 8-storey structure was arrested dramatically while attempting to flee to India.

Sohel Rana was arrested by the country's elite anti-crime Rapid Action Battalion from Benapole, one of the 14 land ports with India, just as he was about to cross into West Bengal, making this afternoon's arrest the fifth in the case.

Rana was later brought from Benapole in Jessore district to the RAB headquarters in Dhaka in a helicopter and was presented before the media.

"The Prime Minister had promised that those responsible will be brought to justice. She has kept her promise," Nanak said.

The structure that housed five garment factories, a bank branch and around three hundred shops employing thousands of workers, collapsed on April 24 leaving at least 397 people dead, a day after authorities issued a warning regarding cracks in the building.

According to officials, Rana erected the building defying safety rules and proper clearance.

Meanwhile, on Sunday rescuers launched the second phase of the rescue campaign as they had lost hope of finding any more survivors.

"We are now launching the second phase (of the rescue campaign," commander of the rescue operation Major General Chowdhury Hassan Sarwardy told reporters.

Under the first phase strategy, rescuers crawled inside the rubble using small concrete and rod cutters fearing that use of heavy machines could shake the concrete ruins endangering the survivors further.

But they went for the mechanical methods after the rescue bid to save the last detected survivor, a young woman, failed because of a fire, sparked from a rod cutting saw.

Television footages showed army troops and police cordoning off half a kilometre area around the collapsed building and restricting entry of the bereaved relatives as army engineers started mobilising heavy machines like hydraulic cranes and bulldozers to remove tonnes of rubble.

Rescuers had earlier deferred for over 10 hours their planned second phase campaign as they found alive last few survivors under the rubble.

The last few hours of the first phase of the rescue operations were frustrating for the rescuers with one of them describing how a young girl appealed to him ,"don't leave me brother", but could not be saved in time.

Around 2,443 survivors were rescued from beneath the rubble with nine persons pulled out alive on Sunday.

The authorities earlier in the day said they were set to launch the second phase of the salvage campaigns as they found little rhythm or pulses of life under concrete rubble or in between sandwiched floors of Rana Plaza.

"We have now unanimously decided to enter into the second phase of the salvage campaign using heavy equipment like cranes (to remove the rubbles) instead of manual efforts (to rescue survivors)," said Sarwardy during a briefing after a coordination meeting of the rescue agencies.

apparently forced several thousand workers to join the production line even after cracks were reported and warnings were issued.

Owners of two garment units and two engineers responsible for building safety were arrested and remanded in police custody on Saturday on court orders as the death toll continued to rise, prompting angry workers to take to the streets. 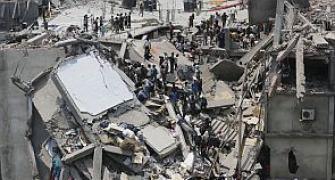 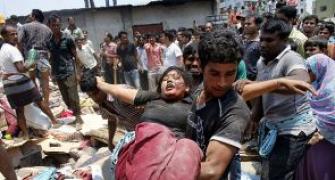 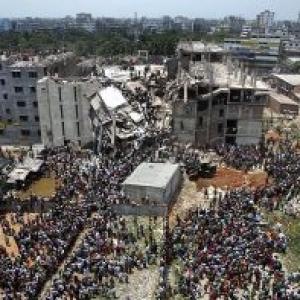