Chhattisgarh rift: Told Rahul everything, says Baghel after the meeting

Amid the power tussle in Chhattisgarh, chief minister Bhupesh Baghel on Friday held a detailed meeting with Rahul Gandhi and conveyed "everything I had to say" to the former Congress chief, who will be visiting the state next week on his invite. 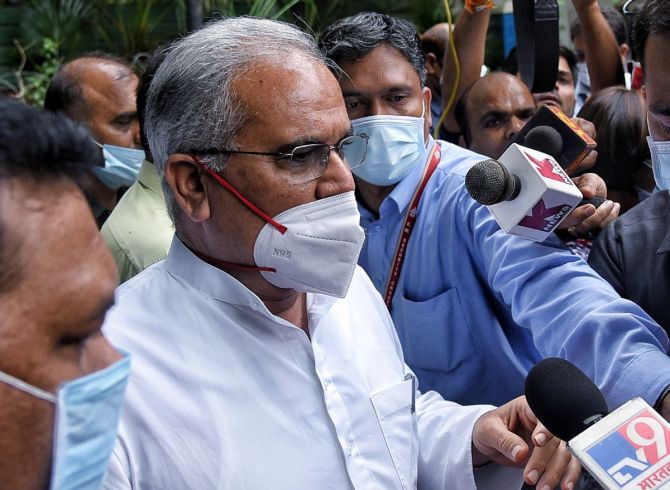 Baghel held a series of meetings at Rahul Gandhi's residence for over three hours, where party general secretary Priyanka Gandhi Vadra, AICC general secretary KC Venugopal and party's Chhattisgarh in-charge PL Punia were also present, and he gave a detailed account of the development schemes being initiated by the state.

Asked about any change of guard, he said the party high command has made him the chief minister and he will continue to hold the position till the time they wanted.

Baghel also stated that the party's in-charge for the state had already mentioned earlier that there was no discussion on the leadership and nothing more was left to be said, indicating that he has got a breather.

After the meeting, Baghel told reporters, "I have said everything that I had to say to my leader. Discussed politics and briefed him on the state's policies and governance. I invited him to the state and he has accepted the invite and will be visiting Chhattisgarh next week."

Trouble has been brewing in the Chhattisgarh Congress ever since Health Minister T S Singh Deo sought a change in leadership citing a power-sharing agreement on rotating chief ministership after the party came to power in the 2018 assembly polls.

This is Baghel's second meeting with Rahul Gandhi this week, after he met him on Tuesday, amid talk of a possible leadership change in the state.

Baghel later held a meeting with over 40 MLAs and ministers of Chhattisgarh who had arrived here in solidarity with the chief minister.

These legislators put up a show of strength in Baghel's support and wanted him to continue as chief minister. They have been camping in the national capital since Thursday.

They met Punia in the morning at his residence and later again at the AICC headquarters, where the chief minister was also present.

After meeting the legislators at the AICC, Baghel said they had come to meet their leaders and have met some of them.

He said they wanted to meet Rahul Gandhi, but will now meet him in their own areas when the former Congress chief visits the state.

"The Gujarat model has failed and now the Chhattisgarh model has to be presented to the country now," he said.

Both Baghel and Deo had also met Venugopal on Wednesday.