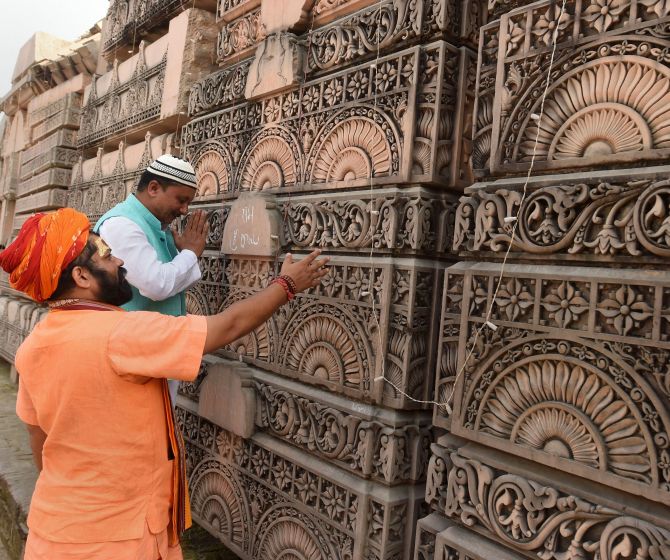 Filing a review petition challenging the Supreme Court's Ayodhya verdict will not be in the interest of Muslims and will "harm" Hindu-Muslim unity, National Commission for Minorities chairperson Ghayorul Hasan Rizvi said on Sunday.

The minority panel chief said filing the review petition would send a message to the Hindus that they were trying to put roadblocks in the way of building the Ram temple.

He also urged the Muslim side to accept the five-acre alternative land to be given for a mosque, saying they would be respecting the judiciary by doing so.

Rizvi said the NCM had held a meeting after the Supreme Court verdict and all its members in one voice had said the verdict should be accepted.

The NCM chairperson said Muslims should help in building the temple in Ayodhya, while Hindus should help in the construction of the mosque. He said it would prove to be a milestone in strengthening the social harmony between the two communities.

According to Rizvi, filing of the review petition would send a message to the Hindus that the Muslim community wanted to put roadblocks in the way of building of the Ram temple in Ayodhya, which he said would "harm" Hindu-Muslim unity.

"Review petition should not be filed at all because all sides, including the All India Muslim Personal Law Board and the Jamiat Ulema-i-Hind, had promised that the verdict given by the Supreme Court will be respected," Rizvi said.

He alleged that Muslim bodies like the AIMPLB and the Jamiat were going back on their word after making the proclamation that the apex court's verdict would be respected.

"Not just now, for years they have been saying that they will accept the verdict by the Supreme Court, then what is the need for review?" Rizvi asked.

"The common Muslim of this country is not in favour of a review petition because he or she does not want that matters which have been settled are again raised and the community gets caught up in such things," the NCM chief said.

Rizvi said just four-five members of the AIMPLB, including All India Majlis-e-Ittehad-ul-Muslimeen chief Asaduddin Owaisi, were in favour of filing a review petition.

The NCM chief alleged that Owaisi does politics using Muslims and wants to "keep them caught up in such issues so that he gets the votes".

Rizvi underscored that leaders should avoid all this as there are several issues of Muslims and work should be done for that.

"This (review) will not be in the interest of Muslims. As the chairman of the commission, a number of Muslims meet me everyday and they say that review should not be filed," he said.

"It will not be in the interest of Muslims because the message will go to the Hindus that Muslims want to keep the temple issue unresolved which in a way will harm Hindu-Muslim unity," Rizvi said.

In its judgement in the Babri Masjid-Ram Janmabhoomi title case on November 9, the Supreme Court had ruled that the entire 2.77 acres of disputed land should be handed over to deity 'Ram Lalla' (infant Ram), who was one of the three litigants.

The five-judge constitution bench also directed the Centre to allot a five-acre plot to the Sunni Waqf Board in Ayodhya to build a mosque.

Rizvi said the Muslim side should accept the five-acre land, adding that they would be respecting the government and the court by doing so.

"There are six-seven mosques in Ayodhya and Muslim population is not much so they suffice," he said. "But it is not an issue of mosque, if the Muslim side accepts the land to be allotted by the government, it will be respecting the government and the court."

Rizvi also hit out at AIMPLB secretary Zafaryab Jilani, saying some people like him have made the Ayodhya issue "their livelihood" and that is why they want to keep it alive.

The AIMPLB and the Maulana Arshad Madani-led Jamiat had announced last Sunday that a review petition would be filed against the Ayodhya verdict.

The board, after a meeting in Lucknow, had also said it was against accepting the five-acre alternative land given for a mosque as it "will neither balance equity nor repair the damage caused".

The Maulana Mahmood Madani-led faction of the Jamiat, however, has said filing a review would not be fruitful.

The Uttar Pradesh Sunni Central Waqf Board has said it would not file a review petition in the Ayodhya verdict.

The board will hold a meeting to discuss various issues related to the verdict at its meeting on Tuesday.