Nearly 90 people have been arrested and action taken against over 8,000 social media posts as authorities maintained a tight vigil in the temple town and elsewhere in the country in the wake of the Ayodhya verdict. 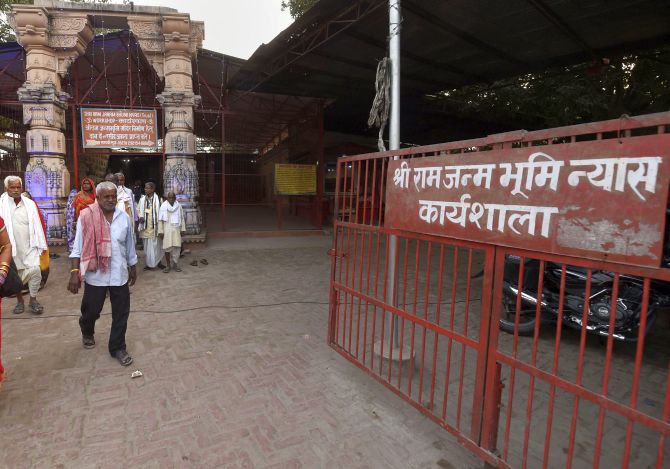 IMAGE: People during a visit to the Shri Ram Janmbhoomi Nyas Karyashaala (workshop) in Ayodhya, a day after the Supreme Court's verdict. Photograph: Nand Kumar/PTI Photo

There has been no report of any untoward incident from anywhere in the country, officials said, adding home minister Amit Shah has telephoned several chief ministers over the last two days to ensure peace in run up to and after the Supreme Court judgement in the Ram Janmabhoomi-Babri Masjid land dispute case.

Security of the five judges, including Chief Justice of India Ranjan Gogoi, who delivered the verdict on Saturday has been enhanced with the deployment of additional troops, barricades and mobile escort teams, officials said.

Since Saturday, the Uttar Pradesh police has arrested 77 people, including 40 on Sunday, for allegedly trying to vitiate the atmosphere through social media posts, according to a police statement.

In Madhya Pradesh, eight people were arrested in Seoni and two in Gwalior for posting objectionable messages on social media and bursting crackers after the Supreme Court verdict, police said.

Gwalior jail warden Mahesh Awad was suspended for bursting crackers in Chhaoni area despite a ban on such post-verdict activities by district authorities.

In Ayodhya, devotees flocked to various temples to offer prayers amid tight security arrangements, especially around the disputed site, though some local Muslim leaders claimed that the traditional processions taken out on Prophet Muhammad's birth anniversary Eid-e-Milad-un-Nabi were cancelled on Sunday as a "precaution" and also due to "sadness" over the verdict.

However, authorities asserted that the processions were taken out, though they might have been scaled down.

The government continued to engage religious and spiritual leaders over the Ayodhya issue as National Security Advisor Ajit Doval held a meeting with eminent Hindu and Muslim religious leaders who pledged unstinted support to the government in all steps to maintain peace and order, according to officials.

The meeting was scheduled before the announcement of the verdict date, according to some leaders who participated.

Meanwhile, All India Majlis-e-Ittehadul Muslimeen chief Asaduddin Owaisi again questioned the judgement, saying "if Babri Masjid was illegal why were L K Advani and others being tried in connection with its demolition".

Addressing a public meeting on Saturday night, the AIMIM president said, "If Babri Masjid was legal then why was it (land) handed over to those who demolished it.

"If it was illegal then why the case is going on and withdraw the case against Advani. And if it is legal then give it to me.

"It's a basic question... We are not satisfied with this judgement. Babri Masjid is my legal right. I am fighting for the Masjid and not the land," the Hyderabad MP said.

Soon after the verdict, the leader had criticised it as a victory of faith over facts.

Settling a fractious issue that goes back more than a century, the Supreme Court in its historic verdict on Saturday backed the construction of a Ram temple by a government trust at the disputed site in Ayodhya, and ruled that an alternative five-acre plot must be found for a mosque in the Hindu holy town.