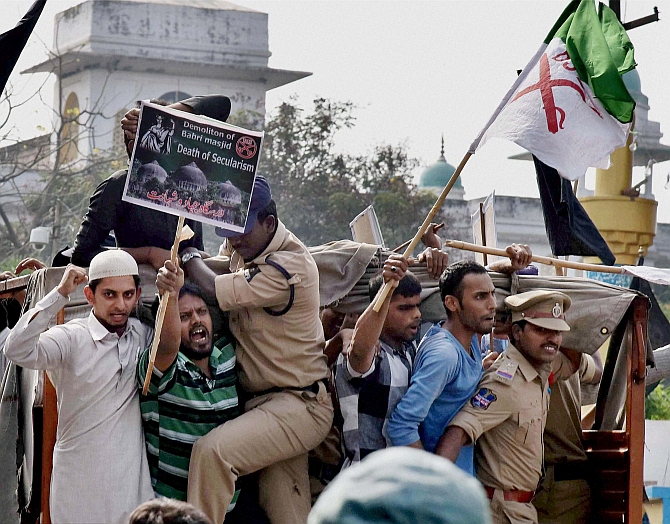 The Supreme Court on Thursday took note of allegations of Muslim parties that many witnesses of Nirmohi Akhara made 'tall claims' in their testimonies and asked them whether they still accept that it has rights over the disputed Ram Janmbhoomi-Babri Masjid land at Ayodhya.

A five-judge Constitution bench headed by Chief Justice Ranjan Gogoi considered the submission of senior advocate Rajeev Dhavan, appearing for Sunni Waqf Board and others including original litigant M Siddiq, that there were 'discrepancies' and 'contradiction' in statements of witnesses examined by the Akhara in favour of its lawsuit.

"Somebody said Nirmohi Akhara came into being 700 years ago, some said 250 years ago... A witness said Lord Ram was there 12 lakh years ago...

"But, I cannot get away from the fact that there are records that Nirmohi Akhara was there in 1855-56 and a suit was filed (by Mahant Raghubar Das) in 1885," the senior advocate told the bench also comprising justices S A Bobde, D Y Chandrachud, Ashok Bhushan and S A Nazeer.

A witness, who had testified in over 200 cases, believed that there was 'no harm in telling a lie' if a place has been forcibly taken away, he said.

"Despite these contradictions, you still maintain that they (Nirmohi Akhara) have established their shebaiti (managing) rights," the bench asked.

If the 'shebaitship' of Nirmohi Akhara was accepted, then their evidence will also be accepted, the bench said on the 20th day of the hearing in the politically-sensitive case.

Right as 'shebait' was restricted to the plea seeking right to manage, charge and worship at the site and it did not give rise to any ownership claim to 'Akahara', Dhavan, who was assisted by lawyer Ejaz Maqbool, said.

These witnesses cannot be called 'liars in toto', but the Muslim parties 'stand by' with their claim that the incident of placing of idols inside the central dome on the intervening night of December 22-23, 1949 at the disputed site did take place, Dhavan said and urged the bench that part of testimonies, contrary to Muslims' claim, be discarded.

"I accept that Nirmohis are 'shebaits' of 'Ram Chabutara in outer courtyard. Some part (of statements of testimonies) is not credible. The tall claims are not correct," he said.

He said a 'shebait' can be the manager of the property and can live on its earnings, but 'certainly' it has no title rights over such an asset.

Referring to pleadings of Akhara, Dhavan said it has claimed that "'Janmsthan' now commonly known as 'Janmabhoomi' ... belongs and has always belonged to the plaintiff no. 1 (Akhara) who through its reigning 'Mahant' ... has ever since been managing it and receiving offerings made there at in form of money, sweets, flowers and fruits and other articles and things."

Dhavan alleged that Akhara by using terms -- belong and belonging to -- in its lawsuit has sought ownership of the entire disputed site and idols there.

He then extensively dealt with the meaning of the terms by citing dictionary and judgements and said there was a 'contrast' between terms 'belonging to' and 'ownership'.

"Without prejudice..., a question was raised about the meaning of the word 'belong' and 'belonging to'. It is submitted that they (terms) connote ownership with some flexibility," he said.

The bench asked Dhavan as to why he was stressing on these terms as they were not part of law and moreover, Akhara has been seeking management and charge of the property.

If Akhara says that it is a 'shebait', which is the manager and in service of the deity, to whom the land belongs then it may construed that the land is owned by the deity and managed by the 'shebait', the bench said.

"Nirmohi Akhara's right as shebait does not exist without the deity and the 'shebait' being in the service and management of the deity has the right to serve and protect the interest of the deity," it said.

Dhavan then said the lawsuit of Akhara was time-barred under the law of limitation as they said that their cause of action started when the receiver took possession of the disputed site on January 5, 1950 and the case was filed in 1959 which is beyond the three year time limit.

The bench said that Akhara has argued that it was a case of "continuous wrong" as the deprivation from management and prayer rights continued and moreover, no final adjudication on the attachment proceedings took place and hence the plea of Akhara was not time-barred.

"As the final order was not passed in the Section 145 proceedings (attachment of site). So Akhara says that the Limitation dos not run against it. What You (Dhavan) have to say," it asked.

When did the cause of action arise, it started on January 5, 1950 and they filed the case in 1959, Dhavan said, adding that Akhara 'muddled up' their case.

Dhavan would continue his submissions on September 11.