The News Broadcasting Standards Authority has advised all television channels to take "caution" while reporting on the Ram Janmabhoomi-Babri Masjid case and avoid "inflammatory debates" which are likely to create tension. 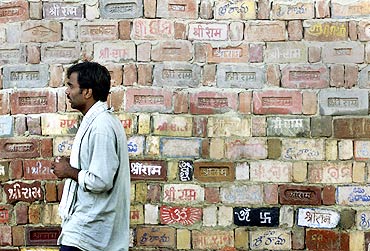 The NBSA, a self regulating body for news channels, also advised channels that no footage of the demolition of the Babri Masjid is to be shown in any news item relating to the Ayodhya matter.

"No broadcast should be made in any speculative manner in respect of the present proceedings before the Supreme Court nor of the judgment before it is pronounced; and of its likely consequence thereafter which may be sensational, inflammatory or provocative," the two-page advisory released on Wednesday said.

It urged news channels that no news in relation to the present proceedings pending before the Supreme Court shall be broadcast unless the reporter or editor have adequately ascertained the accuracy, authenticity and correctness of what is reported, preferably from court records, or at the very least, by being personally present during such proceedings.

"For clarity and adherence, it is emphasised that programmes or telecast should not speculate on issues relating to the Ayodhya judgment or its repercussions," the advisory said.

It also asked channels not to show visuals depicting celebration or protest by persons in respect of the Ayodhya matter.

"Telecast of any news/programme must not give any impression of bias or prejudice in favour of, or against any community," the advisory said.

The NBSA advised that care should be taken to ensure that no opportunity is given to anyone to express any extreme view, including in debates in order to influence the viewers.

"Debates which are provocative and inflammatory and likely to create tension in the public should be avoided," the NBSA said.

After hearing the arguments of the Hindu and the Muslim sides for 40 days, a five-judge Constitution bench, headed by Chief Justice Ranjan Gogoi, concluded hearing in the case and reserved the judgment.