Attack on yatris a blot on all Muslims and Kashmiris: Mehbooba Jammu and Kashmir Chief Minister Mehbooba Mufti said the terror attack on Amarnath pilgrims in Anantnag has shaken the edifice of Kashmiri ethos, terming it as a “blot on all Muslims and Kashmiris”.

The chief minister, who had spent the night in a hospital in Anantnag where the injured were rushed on Monday, paid floral tributes to those killed in the attack on Tuesday.

Accompanied by Deputy Chief Minister Nirmal Singh, she visited the Srinagar airport and consoled the bereaved families, expressing anguish over the incident, an official spokesman said.

“This act of violence has shaken the edifice of Kashmiri ethos and culture,” she said. 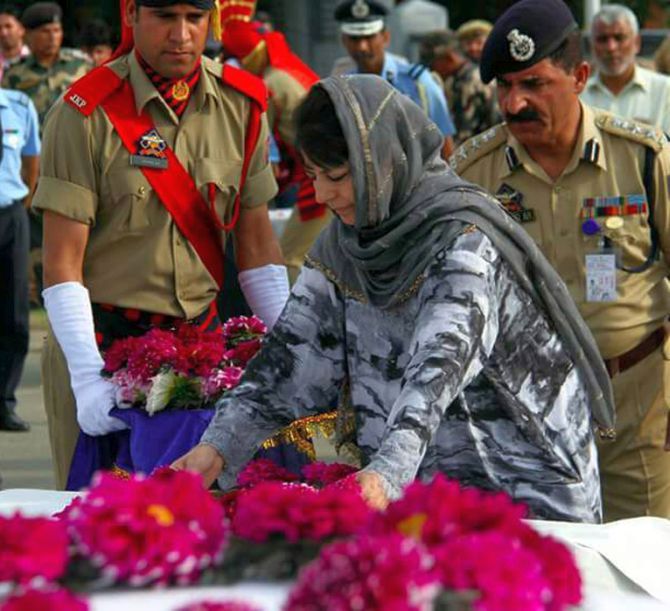 IMAGE: The J-K CM lays a wreath on the coffin of one of the victims of the Amarnath Yatra terror attack. Photograph: Umar Ganie/Rediff.com

Earlier, Mehbooba and Singh visited the injured tourists at Srinagar and Anantnag and wished them a speedy recovery. She directed the hospital administrations at both the places to ensure best possible care to the injured.

While visiting the injured in the hospital on Monday, she had said the head of every Kashmiri hangs in shame over the incident.

“Pilgrims come to Kashmir every year for the yatra despite all difficulties. And seven people died today. I have no words to condemn it. I hope the security forces and the Jammu and Kashmir police arrest the perpetrators forthwith and take stern action against them,” the chief minister had told reporters.

“This incident is a blot on all Kashmiris and Muslims. We will not keep quiet till we bring the culprits to book,” Mehbooba had said.

She had said efforts will be made to ensure that quick action is taken against the culprits and justice is done.

The spokesman said, “The chief minister herself supervised the rescue, evacuation and relief operations throughout the night. She visited the injured and stranded yatris and assured them all help from the state government.”

She had reached Anantnag and taken an on the spot assessment of the situation, he said adding that she also visited the place where the attack took place.

Seven people, including six women, were killed and 19 injured in the dastardly attack. The victims were on a bus carrying pilgrims from Valsad district of Gujarat. The vehicle came under terrorists’ fire near Khanabal on Monday night.