ATS gets extended custody of Abu Jundal in Nashik case

Terror suspect and 26/11 handler Abu Jundal's police custody was extended till October 3 by a court in Nashik on Monday.

Jundal was produced before Chief Judicial Magistrate A D Sawant amid tight security.

Jundal is in ATS custody here since September 11 in connection with a 2010 case, in which Maharashtra ATS had raided a house in Satpur near here and arrested Bilal Shaikh alias Lalbaba, an alleged Lashkar member, and seized RDX and some other explosives.

According to Anti-Terrorism Squad, Bilal Shaikh and Himayat Baig, an accused in German Bakery blast, had undertaken a recce of Nashik's Maharashtra Police Academy and Devlali cantonment area, for planning an attack. Jundal was a party to this conspiracy, ATS says.

"Chief Judicial Magistrate A D Sawant had asked Jundal whether he wanted legal aid in the case to which he replied in the affirmative. Advocate M B Joshi will also represent Jundal besides Shaikh and Baig," he said.

Seeking extension of Jundal's custody, the ATS told the court it has traced Jundal's email address and wants to investigate him on other angles. 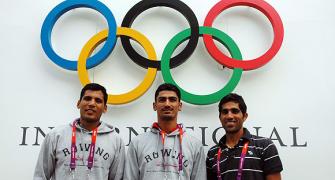 'Reaching quarter-finals will be achievement for rowers'
The link between Bangalore plot and HuJI: Majid Bilal
SC grants two weeks to Centre to decide on Abu Salem