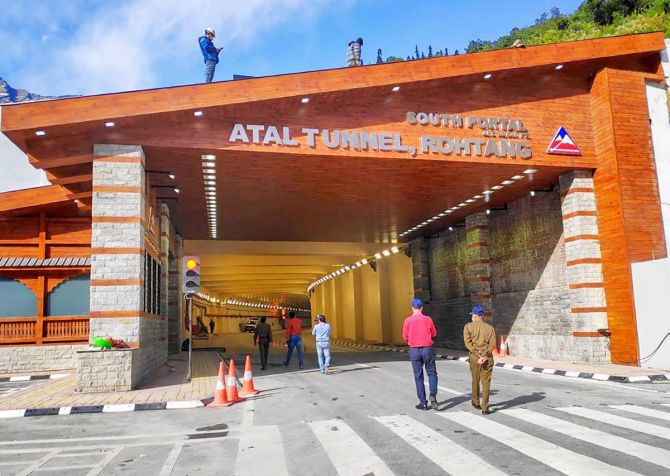 IMAGE: A view of world's longest high-altitude tunnel on Manali-Leh national highway in Manali. The 9-km tunnel built at an altitude of about 10,000 feet above sea level will shorten the distance between Manali and Leh. Photograph: PTI Photo

Amar Singh and Ram Dev, sons of Arjun Gopal alias Tshidawa, said their father had suggested the construction of the tunnel to the former prime minister.

Prime Minister Narendra Modi on Saturday inaugurated the strategically important all-weather Atal Tunnel, which reduces the distance between Manali and Leh by 46 km and the travel time by four to five hours.

Atal Tunnel is the longest highway tunnel in the world, and the 9.02 km long tunnel connects Manali to Lahaul-Spiti valley throughout the year. The valley was earlier cut off for about six months every year due to heavy snowfall.

Himachal Pradesh Chief Minister Jai Ram Thakur had earlier said, "Vajpayee got the idea for constructing the tunnel on a suggestion from his friend Arjun Gopal of Tashi Dobhe village in Lahaul."

Talking from their native village Tholang in Lahaul-Spiti district, Amar Singh, 75, said his father met Vajpayee in 1998 in Delhi, seeking the construction of the strategically significant tunnel beneath Rohtang Pass for the benefit of the residents of Lahaul-Spiti district.

"My father passed away in 2008. Today, his decades-long dream came true and my joy knows no bound," he said.

Singh, who retired as state deputy director (education), said the former prime minister and his father came close during an officers' training camp of the Rashtriya Swayamsevak Sangh in 1942 in Gujarat's Vadodara.

"When Vajpayee became the prime minister in 1998, my father met him through a prominent RSS activist Chaman Lal," he said.

Singh said 'Lahaul-Spiti-Pangi Janjaati Sewa Samiti' was formed with Gopal as its founder president to pursue the construction of the tunnel.

He said Vajpayee sent copies of the memorandum submitted to him for construction of the tunnel to defence, finance and surface transport ministries.

Following initial objection by the defence ministry, the Union government gave its approval for constructing the tunnel in 2000, Singh claimed, adding that Vajpayee himself announced about the project during a public meeting at Keylong in June, 2000.

Gopal's other son, Ram Dev (61), a retired officer of the state information department, said the economy of Lahaul-Spiti district would see a drastic change after the opening of the tunnel.

He also travelled in a Himachal Road Transport Corporation bus which was flagged off by Modi from north portal in Lahaul to south portal in Manali of Kullu district.

"The agriculture, horticulture and tourism sectors of the tribal district will witness a positive sea change in the coming days. The tribal district used to remain cut off for about five months due to snow-laden roads during winters," Dev added.

Residents of the tribal district also hailed the construction of the tunnel.

Pushpa Devi of Kirting village of the district said there was no longer the need for rushing to other districts for medical help. She said earlier pregnant women were shifted from the district to Kullu-Manali for safe delivery.

Similarly, Sanjay Yarpa of Gahar valley said critical patients had to suffer a lot as they could not be airlifted to Kullu-Manali for better healthcare as helicopters failed to land here due to bad weather during winters.

"This problem will now cease to exist as road connectivity through the tunnel will remain in operation almost throughout the year," he rejoiced.

Dharmendra Joshi
© Copyright 2021 PTI. All rights reserved. Republication or redistribution of PTI content, including by framing or similar means, is expressly prohibited without the prior written consent.