Modi, Shah walk with sea of mourners to bid adieu to Vajpayee

India's top leadership, foreign dignitaries and the common man mourned the death of Atal Bihari Vajpayee and bid an emotional farewell to the former prime minister who was one of the most-loved leaders in decades and had acceptability across a diverse ideological spectrum. 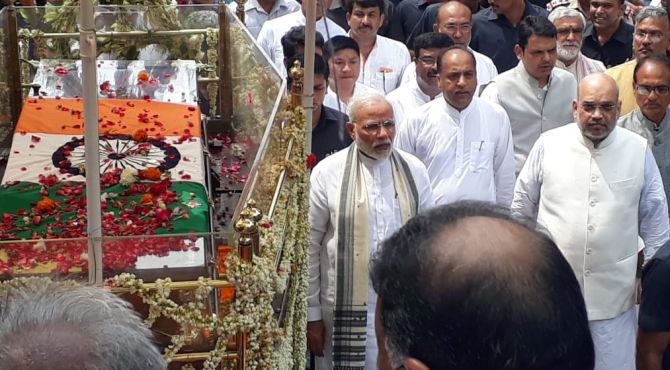 Chief ministers, opposition leaders, chiefs of Army, Navy and Air Force, governors and a host of other dignitaries attended the funeral of Vajpayee at Rastriya Smriti Sthal, a cremation site at the heart of the capital. The country bid farewell to its political icon amid a light drizzle. 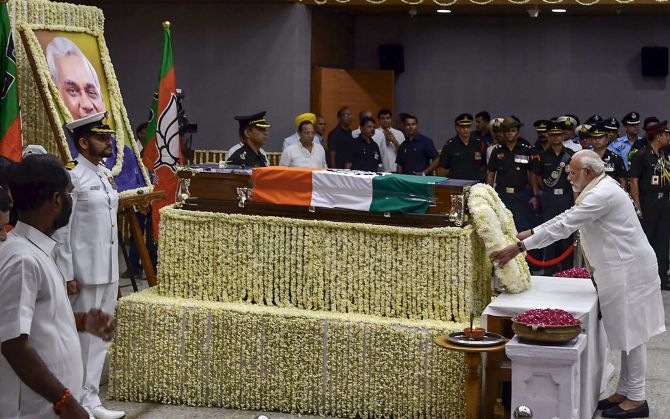 IMAGE: Prime Minister Modi lays a wreath on the mortal remains of Vajpayee as he pays last respects at BJP headquarters in New Delhi on Friday. Photograph: Kamal Singh/PTI Photo

A large number of people flooded the streets in front of the BJP headquarters, where his body was kept from morning till around 2 pm for people to catch a last glimpse of the leader.

Amid chanting of Vedic mantras, his body was then taken in a procession to the Rashtriya Smriti Sthal where he was accorded a state funeral.

Chants of 'Atal Bihari Amar Rahe' rent the air, even as a man blew a conch ('shankh') as the procession began.

Hordes of people ran along on the other side of the Deendayal Upadhaya Marg and jostled to take pictures as the cortege made its way forward.

Modi, Shah and Chauhan walked behind the gun carriage carrying the mortal remains of the former prime minister from the BJP headquarters to Smriti Sthal. 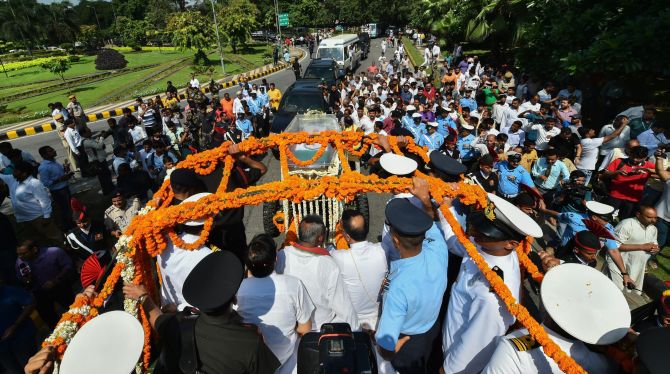 Amid sultry weather conditions, a large number of people walked along the over seven km-long route.

Heavy security was deployed along the route of the procession.

The crowd was so massive that the people spilled over makeshift barricades put along the road-divider and jostled to get a glimpse of the former prime minister.

Along the way, few shopkeepers, downed shutter as the carriage passed by while many onlookers folded their hands in a mark of respect. 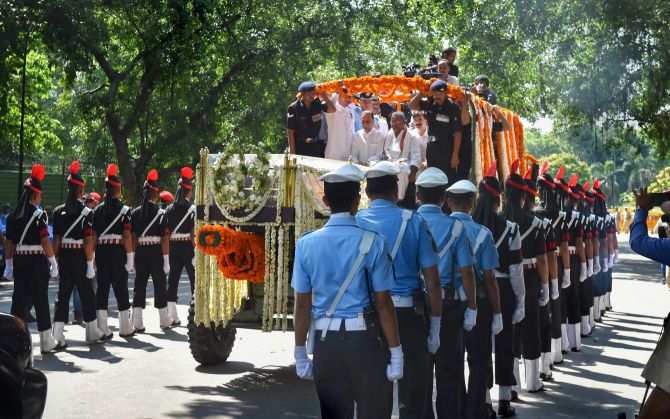 At the Rashtriya Smriti Sthal, Vajpayee's mortal remains were consigned to flames in the evening, as the sun set on the life of the poet-politician who combined accommodative politics with graciousness.

Scores of people gathered at the Sthal to pay their respects to the tall leader, who was cremated with full state honours. 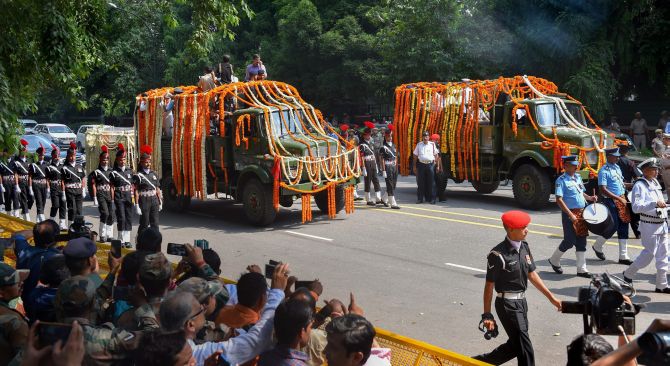 Vajpayee, 93, died at the All India Institute of Medical Sciences on Thursday in New Delhi after a prolonged illness.

Amid sultry weather conditions, thousands of people walked along the over seven km-long route with some showering petals at the carriage. Heavy security was deployed along the route of the procession. 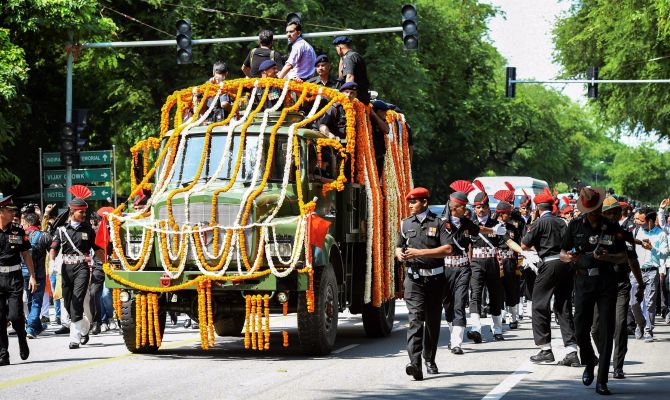 IMAGE: People walk along the convoy as it passes through Akbar Road. Photograph: Subhav Shukla/PTI Photo

During the procession, people chanted slogans like "Atal Bihari Amar Rahe" as Vajpayee's cortege made its way from the BJP headquarters to the cremation ground.

Last night, Vajpayee's body was taken to his official residence on Krishna Menon Marg from AIIMS where he was admitted in June.

Police have made elaborate security arrangements for the funeral procession, officials said.