The staff working at Delhi's busiest and biggest cremation site in the wake of outbreak of the Covid pandemic go about their job with resilience, helping in whatever way possible, reports Subhomoy Bhattacharjee. 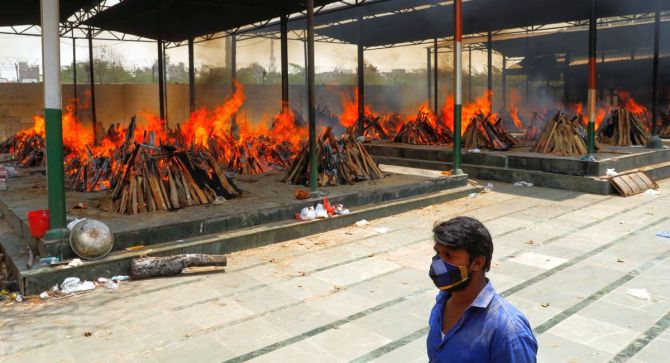 IMAGE: A man walks past the funeral pyres of those who died from coronavirus during a mass cremation at Nigambodh Ghat crematorium in New Delhi. Photograph: Adnan Abidi/Reuters

Mornings are when the Nigambodh cremation ground in Delhi is the busiest, nowadays. “The hospitals release the bodies of Covid patients early for their families” says Sanjeev (he gives only his first name), who maintains the register at the window of the funeral office, just outside the shed for CNG pyres.

The central cupola at the entrance is filling up with the arrivals as the priests take charge of each of them.

Some have their families by their side to see them off on their final journey; others only have the hospital staff in PPE suits to accompany them.

Soon, a shambolic queue has formed outside the window abutting Sanjeev’s long table.

As he writes down the details from the death certificates, those outside fill up the forms he hands out to them. In the end, he gives them a receipt.

The room is crammed with memories of the dead, the iron almirahs behind him stuffed with the records of those who have passed this table.

Out-of-use voltage stabilisers with wires hanging out from them sit above the almirahs, while a dusty biometric attendance recorder makes up the stock of furniture in the room.

In North India, in ordinary circumstances, mornings are a lean time for cremation grounds. The crowds start filling in later in the day when bodies are released from hospitals or brought from their homes. The North Delhi Municipal Corporation has taken advantage of this flow to pack in Covid funerals early in the mornings to avoid overcrowding. One can see the sense in the arrangement.

But this has taken time to work out, says Sanjeev, speaking with me even as he attends to queries from those standing outside. “The second fortnight of April was a particularly bad time. I wouldn’t have space even to drink water.” He says people outside would lose patience and wonder if the staff was deliberately delaying things or giving preferential access to some.

Sanjeev’s superior, Inder (he, too, does not reveal his last name), says each municipal corporation soon passed orders to cremate Covid patients at crematoriums nearest to the hospitals where they had died. The ambulances were not to come to Nigambodh, though for religious reasons it is the preferred destination for last rites.

There is a notice outside the registration room specifying the names of the eight or so major hospitals from which the ground will receive the dead for Covid funerals. These are mostly from North and Central Delhi. Non-Covid cases can come from anywhere else, though. This reduced the pressure at the Ghat.

Nigambodh Ghat is the largest cremation ground in Delhi. It is run by an NGO, Badi Panchayat Vaish Bisa Agarwal Samity. Most of the staff here, some 90-odd employees, mostly young men, provide a very organised service. On this day, they are willing to talk easily, helping out where they can, resilient in the face of the calamity that has struck the city.

On the other side of the registration room is the section where receipts for the wood for cremation are issued. The staff asks the man who has approached the counter what sort of wood he would need: ordinary or special? The special one burns better. For the Covid corpses, it is mostly the CNG-run electric crematorium.

Throughout the morning, there is a brisk turnout at the CNG shed. Not so in the afternoon. The priests milling about, says an official, are “freelancers” and they do not interfere in the official work of the Ghat.

In addition to the Panchayat Samity staff, there are about five from the NDMC employed at the Ghat. One of them is Harsh (like the other, he also wants only his first name used). His job is to transfer the entries from Sanjeev’s register onto the official records in the computer.

As we speak, Harsh’s change of guard is taking a nap on the charpai placed next to him. The room is not stuffy though it is lined with wooden and iron almirahs and has no windows. The almirahs hold the records of lives once lived. But one of them is also being used as a clothesline, a tiffin stand and for storing office paraphernalia like computer wires, detergent, paper rims, and odds and ends typical of a government office.

Harsh and his colleagues do a five-hour shift. What are their off days like, I ask. Harsh smiles and says because of the recent pressures, there haven’t been any. So they “adjust” among themselves for leave. They form what is known as the clerical, or Group C, staff in the corporation, though some of them are on contract. That explains the problem in getting leave. The permanent staff would not be denied their weekly off.

Inder has been working at the Ghat for several years, unlike Sanjeev who was employed at a factory in Noida till last year, before the Covid lockdown. The salary is not too bad at the Ghat, he says, and the job is going to be long-term. The others, too, had drifted in similarly. As one of them says, there are not many technical requirements to do the job here. What you do need mostly is a cool head.

And the “cool head” is visible all over, possibly too cool.

As we chat, one of the support staff is sprawled on the ground playing with his mobile phone. He has no mask on. While everyone else does and there is also a helpful sanitiser dispenser at one end, there is no particular rush to sanitise or wash one’s hands as the staff walks in and out of the office. There are plenty of taps around, with uninterrupted water supply.

It is close to evening when I finally leave the Ghat. Lunchtime is long over. The food is provided by a donor each day, though some bring their own.

Do their families fret about their work? “Chinta hoti hai par kaam bhi toh chahiye (they do worry but one needs work),” says one of them.

After putting in eight hours, the Samity staff is now ready to go home.

Meanwhile, more bodies are being brought in -- the Ghat is now open 24x7 given the grim situation. The next batch of the Samity staff is by now here to take care of their final journey. 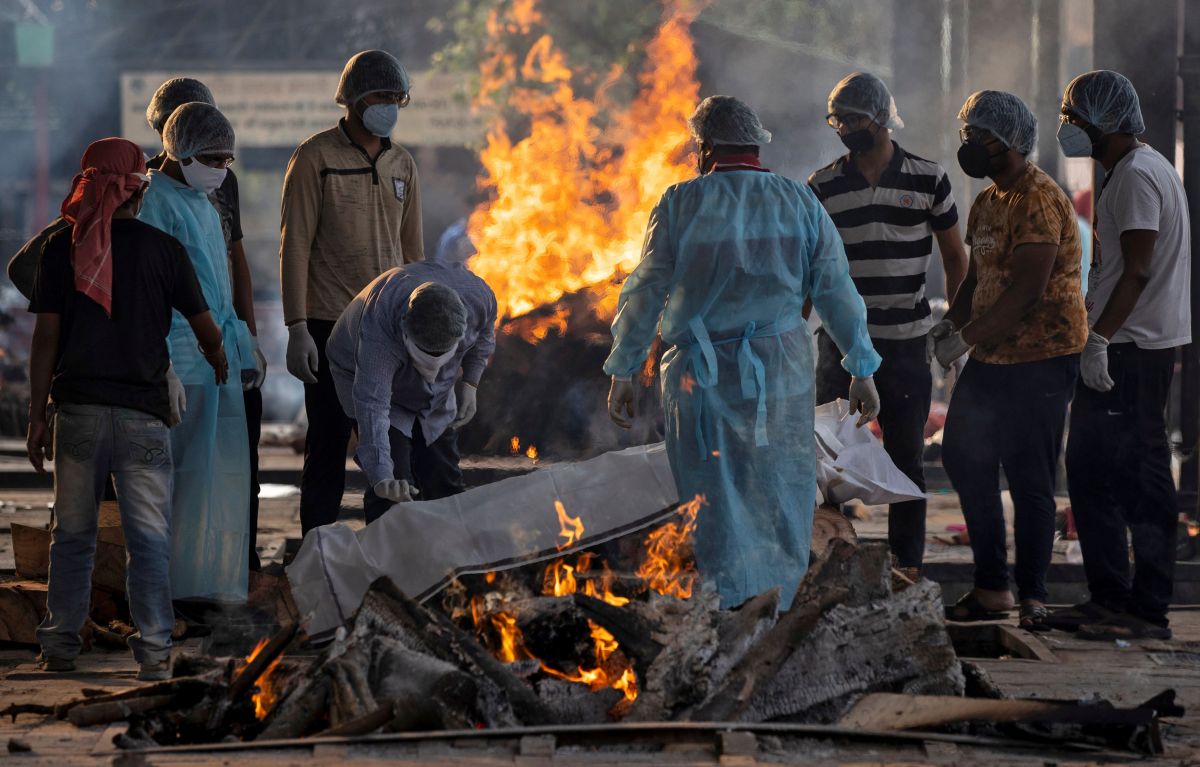 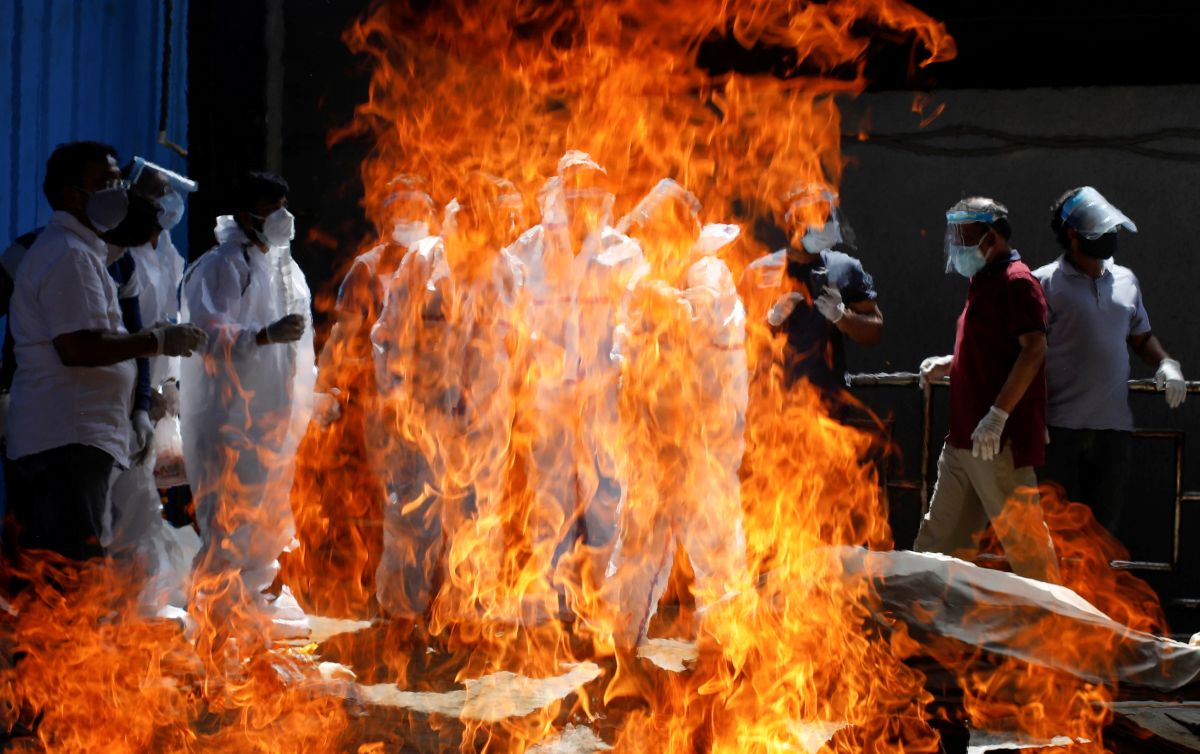