A team of CBI officials personally served the summons to YSR Congress leader Jagan in Yemmiganur town of Kurnool district, where he was campaigning for the next month's by-elections for his party candidate.

Jagan, son of late Chief Minister Y S Rajasekhara Reddy, has been directed to appear in person or through his lawyer before the principal special judge for CBI cases in Hyderabad on May 28.

Acharya is already in judicial custody in the Emaar-APIIC township case, while Jagan's auditor Vijayasai Reddy, who was released on bail on April 30, was not issued summon as he has been attending the court proceedings regularly. 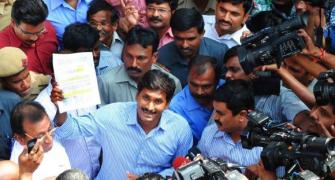