PIX: BJP pins hope on this 'bhai, beta, mama' for hat-trick in MP 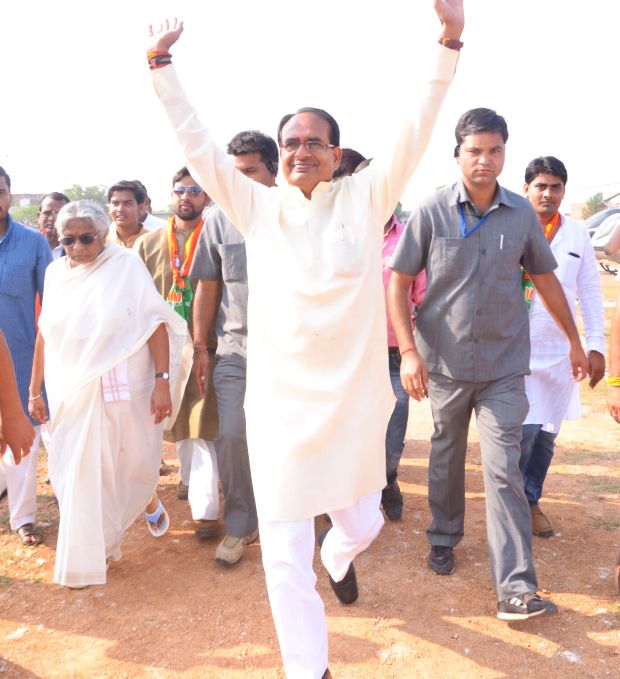 It's 'brand Shivraj' on which the Bharatiya Janata Party is banking to make a hat-trick in Madhya Pradesh, where discontent against sitting MLAs of the party threatens to snowball into a crisis in a number of constituencies.

Despite denying ticket to 45 of its 143 MLAs in the 230-member state assembly, the anti-incumbency against the legislators is still a daunting task for the party, which has ruled the state for past two consecutive terms.

Mindful of the resentment against his party's MLAs, Chief Minister Shivraj Singh Chouhan, who hard-sells his carefully cultivated image of 'bhai, beta and mama' (brother, son and maternal uncle) to people, repeatedly assures in constituency after constituency that if people elect a BJP candidate, they will have "two MLAs -- one the local candidate and one Shivraj -- and I will never disappoint you, will give my life for your development". 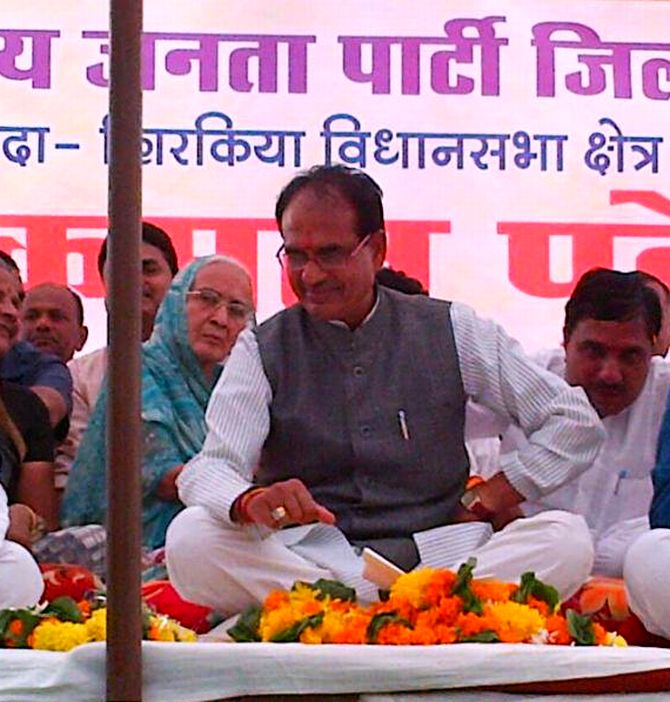 Trailing the campaign of the chief minister in Chambal region for a day brings out the strategy in clear terms.

In Joura assembly segment of Morena, he asks voters, "Do you want to see Shivraj as the next chief minister? If you want me to become chief minister, vote for the BJP candidate Subedar Singh. After all it is MLAs, who will make the chief minister."

The Vaishyas, traditional voters of BJP, have strong reservations against the local candidate, who as the marketing committee head some time ago took certain measures irking the business community.

Chouhan seeks to reassure, "I have come to you with a hope that when hands are raised to elect me as chief minister, they should include the hands of Joura MLA. If Subedar Singh becomes your MLA, you will not have only one MLA. Shivraj will your other MLA... If you want to make Shivraj chief minister, you will have to make Subedar your MLA."

Bhan Singh Yadav from Keravali village in Joura says, "The venue will be filled, when Shivraj will speak. People come here to listen to the chief minister not anybody else. There may be some discontent against the MLA but Chouhan will have impact on voters."

BSP's sitting MLA from the seat, Maniram Dhakad, belongs to the community of Chouhan and poses a tough challenge. 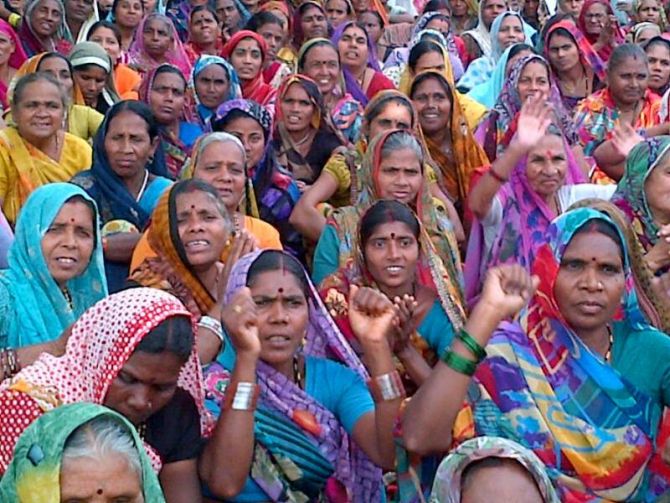 As the challenges surmount, the chief minister, a strict vegetarian not even eating garlic and onion, as his staff gushes, is following a morning to midnight regime to cover as many constituencies as possible.

'Chai' and 'paratha' does the fill for Chouhan as the campaign trail continues.

A day with the chief minister brings out to fore the urgency in the tone of the BJP's development mascot in Madhya Pradesh to reach out to as many voters as possible in an election, in which Congress is trying hard to turn the tide against BJP.

Congress has come out with a charge sheet carrying litany of charges against the BJP government and announcing freebies in its poll manifesto.

Chouhan dismisses both first as a "bunch of lies" and second as "dreamselling".

"They are now promising everything free. What was the position of electricity when they were in power here. Since they know, they cannot come to power, Congress would promise everything free," Chouhan tells voters during his campaign. 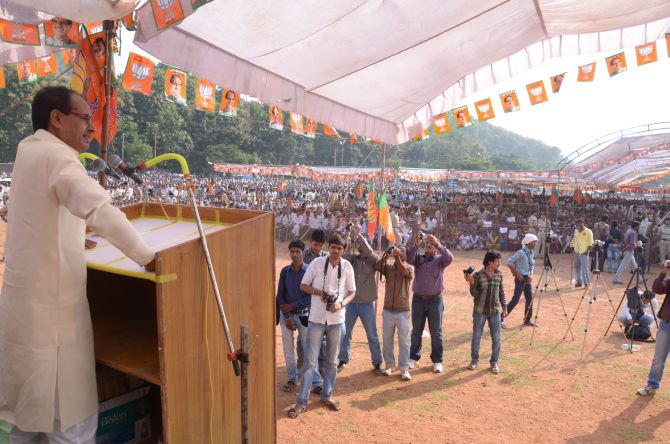 After covering nine constituencies in Gwalior-Chambal region considered to be strong hold of Scindias, Chouhan tells his party's candidate from Morena Rustam Singh, a former inspector general of police in this land once known for bandits, that he should try to take all sections along.

Congress campaign committee chief Jyotriaditya Scindia has also been touring the constituencies in Gwalior and Morena, that are considered the strong hold of the royal family of Scindias.

But Chouhan points out "you saw the crowd in my meetings and compare it with what was the gathering in his meetings. People do not want Congress to come back to power here". 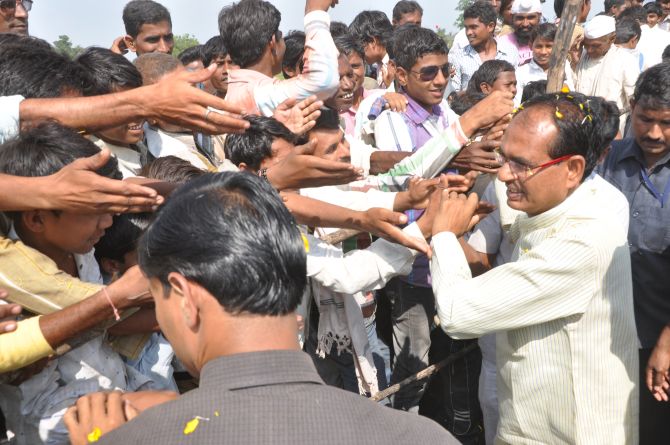 Narendra Modi is also set to go on a campaign blitzkrieg but Chouhan denies this has anything to do with any sense of apprehension that the BJP can otherwise not perform well in Madhya Pradesh.

"Modiji had come here even in the last assembly election," he says but adds that the Gujarat chief minister is "very popular" among masses.

Though Chouhan is confident of a third term, he refuses to hazard a guess as to what number of seats that the BJP could win.

"We will get a comfortable majority. We will increase our previous tally. But I do not want to sound boastful and say that we will finish this or that. No number guessing please."

With Congress putting up a somewhat united face in this election here, Chouhan keeps reminding his voters that "those who did not like to see eye to eye with each other once have now joined together to finish me as their leader Sonia Gandhi told them that if Shivraj becomes chief minister for the third time, they will become very old and will have no time to come back to power". 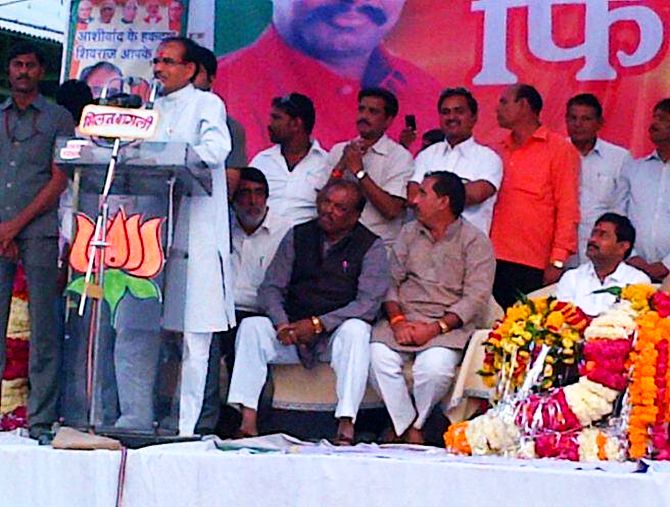 He also takes a dig at former Congress chief minister Digvijaya Singh and its face for this election Jyotiraditya Scindia. "From their side it is raja, maharaja. I am your servant. I never ran the government with the ego of being chief minister. I functioned as the son of the aged ones, brother of the youths and maternal uncle (mama) of the kids."

Addressing a meeting in a farm in Nitahara village in Sumawali constituency, he takes a dig at Rahul Gandhi saying that the Congress vice president talks only about his mother, father and grandmother.

"Family to him means four members. My family is 7.5 crore people of the state."

The chief minister's connect with the masses comes to fore in a number of constituency, even where BJP had not won a seat since independence like Joura but there are serious questions on whether the crowd that is coming to listen to 'Mama Shivraj' will also vote for the BJP candidate.

In power for two consecutive terms, Chouhan does not ignore symbolisms in politics. 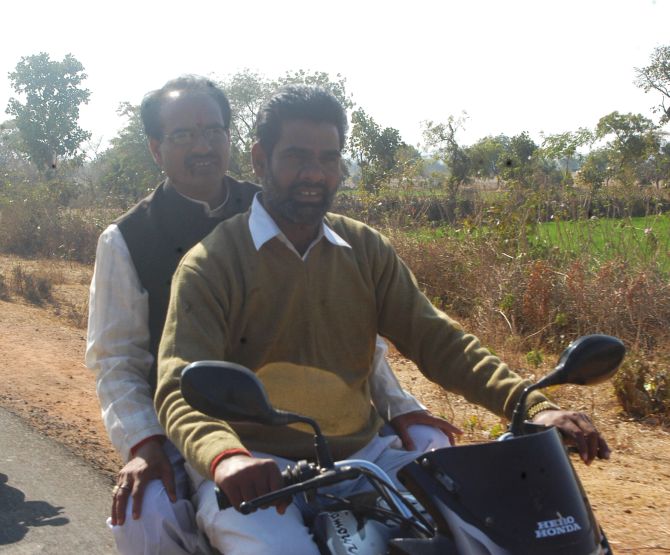 At Jaraina village in Sumawali assembly segment, some Muslim youths lined up at the road side rush to shake hands with Chouhan.

Noticing this, Chouhan asks the driver to immediately stop the car.

As a youth tells him that they want to work with him, Chouhan says with a broad grin, "This is what we (BJP) have done in Madhya Pradesh taking all sections together including the Muslims."

At Morena, a Muslim youth tells Chouhan that his mother wants to meet him.

The chief minister immediately gets down and goes inside to meet the old lady in Haji Barkat Ali building.

"She blessed me that I become chief minister again," says Chouhan.

Morena district has traditionally been a strong hold of BSP. In the last assembly election, BSP, Congress and BJP won two seats each. But BJP's win in the two seats was with a minuscule margin as much less as 256 votes.

BSP has sought to outdo all parties in caste engineering. While candidates of both BJP and Congress in Morena are from Gurjar community, BSP has fielded a Brahmin face. BJP has not fielded any Brahmin candidate in Morena, a factor BSP had sought to cash in on.

Chouhan, however, went to campaign for Anoop Mishra, nephew of former Prime Minister Atal Bihari Vajpayee, who has been fielded by BJP from Bhitarwar constituency in Gwalior district.

Chouhan also acknowledges that while he has brought to an end caste politics in rest of the state, the areas close to UP like Chambal still have some remnants and directs Morena candidate Rustam Singh "meet everybody. Dalits, Muslims, all sections have to come with us".

As the campaign for the day comes to an end in Gwalior, the chief minister engages with the masses cautioning them against falling in the "trap" of Congress.

"It's just another day of campaign. We have to go full throttle before the campaigning comes to an end," Chouhan says.

Tags: BJP , BSP , Chouhan , Morena , Brahmin
More
© Copyright 2022 PTI. All rights reserved. Republication or redistribution of PTI content, including by framing or similar means, is expressly prohibited without the prior written consent.
Print this
article