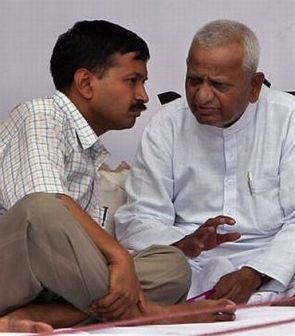 With the Aam Admi Party leading in a number of constituencies in Delhi, Anna Hazare on Sunday said Arvind Kejriwal could become the chief minister one day and warned the Congress that people will teach a lesson to it in the Lok Sabha elections.

Hazare, who had refused to campaign for Kejriwal's party, expressed happiness over the AAP's performance in the Delhi elections where Sheila Dikshit has served as the chief minister for 15 years.

"Delhi is the centre of the country's politics. It is not an easy task to defeat a government which is ruling there with just a broom in hand. The old parties have a lot of money. I feel happy that in such a situation, his party has emerged victorious and got 24 seats," Hazare told reporters when asked about the AAP's performance.

At the same time, he cautioned Kejriwal against allying with any other party, saying, "If an alliance government is made, then it is of no use. In such a government, corruption rules the roost. He should not take the support (of any other party).

"If it is not possible to form a government, fresh elections should be held," said Hazare.

The Gandhian said people voted for Kejriwal's party as they felt it will be more concerned about them and hailed what they have done.

"One day he will become the chief minister on the strength of his party workers," Hazare said about Kejriwal.

He criticised the Congress, which has fared badly in other assembly polls as well, saying, "The Congress was in power for at least 50 years. What was impossible for it? Why did they not bring good laws on the Right to Reject, the Lokpal Bill, the Right to Recall."

"If the Congress does not mend its ways even after this, then people will teach it more such lessons in the Lok Sabha elections," Hazare said.