Assange to be questioned at Ecuador's embassy in London 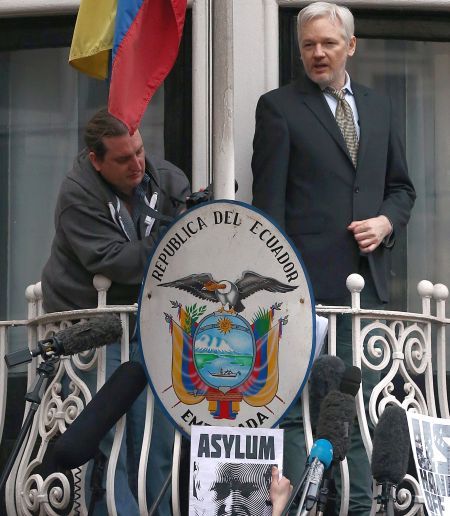 Swedish prosecutors investigating a rape allegation against Julian Assange will question the WikiLeaks founder at the Ecuadorian embassy in London where he has been holed up since 2012, in a possible breakthrough to the four-year impasse.

The Ecuadorean attorney general delivered a document agreeing to a request by the Swedish authorities to question Assange at the Ecuadorean embassy in London, where he has been hiding out since the 44-year-old sought political asylum from Ecuador four years ago.

“In the coming weeks a date will be established for the proceedings to be held at the embassy of Ecuador in the United Kingdom,” a statement issued in Ecuador to the ‘Guardian’ said.

It adds: “For more than four years, the government of Ecuador has offered to cooperate in facilitating the questioning of Julian Assange in the Ecuadorean embassy in London, as well as proposing other political and legal measures, in order to reach a satisfactory solution for all parties involved in the legal case against Julian Assange, to end the unnecessary delays in the process and to ensure full and effective legal protection.

In line with this position, Ecuador proposed to Sweden the negotiation of an agreement on mutual legal assistance in criminal matters, which was signed last December and which provides the legal framework for the questioning,” the statement said.

“Ecuador’s foreign ministry reiterates its commitment to the asylum granted to Julian Assange in August 2012, and reaffirms that the protection afforded by the Ecuadorian state shall continue while the circumstances persist that led to the granting of asylum, namely fears of political persecution.

Assange is wanted in Sweden in relation to a 2010 rape allegation, which the Australian national denies.

He has fought against being extradited to Sweden, saying he fears he would then be transferred to the US to face charges on WikiLeaks’ activities.

In 2012, while on bail, he claimed asylum inside the Ecuadorean embassy in central London after the UK Supreme Court had ruled the extradition against him could go ahead.

A United Nations working group had ruled in February that Assange was being arbitrarily detained.

However, the UK foreign office has called for the UN decision to be reviewed, saying Assange was staying in the embassy voluntarily and that the UK had a legal duty to extradite him to Sweden.

Scotland Yard had scaled back its multi-million-pound security presence from the Ecuadorean embassy last year, saying the operation was “no longer proportionate”.

The round-the-clock vigil on Assange had reportedly cost the force around £11.1 million (Rs 96 crore).