Yet another rhinoceros has been found dead in Kariranga National Park in Assam. A forest guard was injured in an exchange of fire with poachers in a separate incident in the sanctuary.

The carcass of a female rhino, with its horn removed, was found by forest guards near Difloo camp in Bagori range of the park, park officials said on Monday.

This is the second instance of a rhinoceros death in the last two days. Poachers had killed one and removed its horns on Saturday in Sohola camp under Agratoli range of the ark.

Altogether, 42 rhinos have fallen victim to poachers and floods this year.

Meanwhile, a fierce exchange of fire took place between a five-member forest guard patrol and poachers in Bagori range of the park on Sunday night, during which a forest guard was injured. The poachers escaped, the officials said.

The guard was admitted to the Bokakhat health centre. 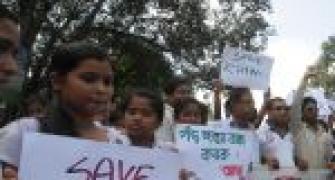 Another rhino killed by poachers in Kaziranga