At least 13 people, including the prime accused, have been arrested so far for allegedly lynching an All Assam Students' Union leader in Jorhat city, while the outfit on Tuesday vowed not to keep quiet until the culprits were given 'exemplary punishment.' 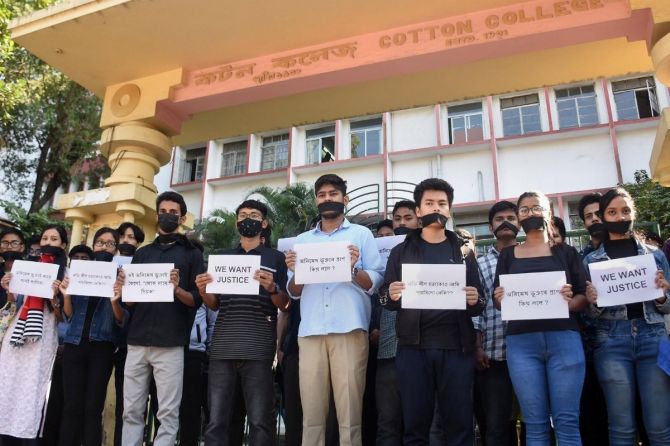 AASU leader Animesh Bhuyan (28) was beaten to death and two others seriously injured by a group of people following a heated argument over an accident in Jorhat on Monday.

The lynching took place in front of scores of onlookers, who did nothing to stop it.

Condoling Bhuyan's death, Chief Minister Himanta Biswa Sarma ordered the police to file the chargesheet within a month for trial in a fast-track court and asked special DGP (law and order) GP Singh to personally monitor the case. A magisterial probe was also ordered into the incident.

Education minister Ranoj Pegu visited Bhuyan's house in Dergaon on Tuesday morning as per the instructions of Sarma, who also announced a relief of Rs 5 lakh for the family of the deceased.

Meanwhile, Jorhat superintendent of police Ankur Jain told PTI that 13 people have been arrested so far from various locations for the barbaric incident, which has sent shockwaves across the state.

"The main accused, Neeraj Das alias 'Kola Lora' (dark boy), was also arrested. We are talking to eyewitnesses and corroborating with video footage to find out if more people were involved in the incident," he said.

Das, a drug peddler, was earlier arrested in one such case, but later released on bail as the trial was yet to begin. Several other cases were also lodged against him, Jain said.

The lynching took place in broad daylight when an old man fell down from a scooter in front of Bhuyan's four-wheeler but some people claimed that the AASU leader had hit the two-wheeler. He and his two friends got down from the vehicle to help the elderly person.

The old man's son and some friends, who were nearby, rushed to the spot and started thrashing Bhuyan and his two friends, accusing them of causing the accident. A large number of people were present at the spot but they remained mute spectators.

One of his companions was local reporter Mridusmanta Baruah and the other was Pranay Dutta, both AASU members.

"It is a serious issue for the society that a person was beaten to death because he came out of his car to help another person. Humanity is at stake. This is happening because there is no fear for law and the government should think about it," Bhattacharya told reporters.

He also demanded that the Assam government must take full responsibility of Bhuyan's family.

Nath blamed the government and the police for the tragic incident as the main accused is a habitual offender and is an infamous drug peddler of the area.

"This is not the first time. In recent times, Jorhat and nearby areas have seen at least three such lynching incidents, including that of Abhijit-Nilotpal and Deben Dutta. They are getting encouragement because law is not taking its logical conclusions," he said.

Nath said that culprits of such heinous crimes are not punished for a long time due to loopholes in chargesheets and interrogation.

"This is a barbaric act. The police said that they will file a chargesheet in Animesh's case within 15 days. We will keep a close watch so that no lapse takes place. We will not keep quiet until the killers of our colleague are given exemplary punishments," he said.

AASU has been staging protests across the state demanding justice for Bhuyan. In Jorhat, the powerful student body took out a march on the main roads of the city.

Various political parties and social organisations, including the Congress, the Anchalik Gana Morcha, the Raijor Dal, the Krishak Mukti Sangram Samiti and the Asom Jatiyatabadi Yuva Chhatra Parishad, have strongly condemned the incident and urged the government to take the strictest action against the culprits.

"Another shameful incident of mob lynching in the state. This time a young student leader became the victim in Jorhat. It's high time the state as well as the country enacts strong anti-lynching laws and takes necessary steps to prevent such horrific crimes," Rajya Sabha MP Ajit Kumar Bhuyan said.

Assam MLA Akhil Gogoi said mob lynching incidents cannot be accepted in a democratic country and demanded that the government introduce a strong Act to prevent such cases.

Bhuyan's lynching brought memories of such incidents in recent times such as that of Abhijit-Nilotpal and Dr Deben Dutta, with people criticising the government on social media for taking "timely inaction" in punishing the culprits.

On June 8, 2018, two friends -- Nilotpal Das and Abhijeet Nath -- had gone to the picnic spot of Kangthilangso waterfalls in Dokmoka police station area in Karbi Anglong district. While returning, their vehicle was stopped at Panjuri Kachari by a group of irate villagers over rumours that the tourists were actually 'Sopadharaa' (child-lifters).

The villagers then attacked the vehicle, pulled the two youths out and bludgeoned them to death. Videos of them pleading for their lives went viral on social media.

The Assam police had filed an 844-page chargesheet within the stipulated 90-day period in September 2018 against 48 accused in the mob lynching case. The case is still in court.

In another gruesome incident that took place on August 31, 2019, senior medical officer Dr Deben Dutta of the hospital of Teok Tea Estate, owned by TaTa subsidiary Amalgamated Plantations Ltd, was killed by an irate mob following the death of a worker undergoing treatment in the medical facility.

The police, within 22 days of the incident, had filed a 602-page chargesheet in the district court, which gave death sentence to one accused and life imprisonment to 24 others for lynching the 73-year-old doctor.