Chief Minister Sarbananda Sonowal urged people not to panic if their names did not appear in the second draft as 'genuine Indian citizens would get full opportunity to make claims and objections'. 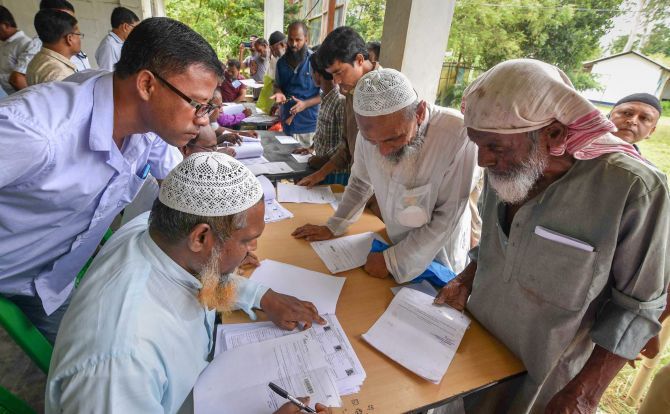 IMAGE: People check their names on the final draft of the states National Register of Citizens after it was released at an NRC Seva Kendra in Nagaon on Monday. Photograph: PTI Photo

The fate of over 40 lakh people remains in limbo with the Centre on Monday declining to comment on their citizenship status after their names were excluded from the final draft of National Register of Citizens.

At a press conference in Guwahati, Registrar General of India Sailesh announced that 2,89,83,677 people were found to be eligible for inclusion in the complete draft of the ambitious NRC out of a total 3,29,91,384 applicants.

Around 40.07 lakh applicants, however, did not find a place in the document, touted to be a proof of Assamese identity.

"This is a historic day for India and Assam. The exercise is unparalleled in the size. It is a legal process done under the direct supervision of the Supreme Court," Sailesh said.

Asked about the reasons for excluding names of around 40 lakh applicants, NRC state coordinator Prateek Hajela, who was also present at the press meet, said, “We are not going to make the reasons public. It will be informed individually. They can find the reasons by visiting NRC Sewa Kendras (NSK)." 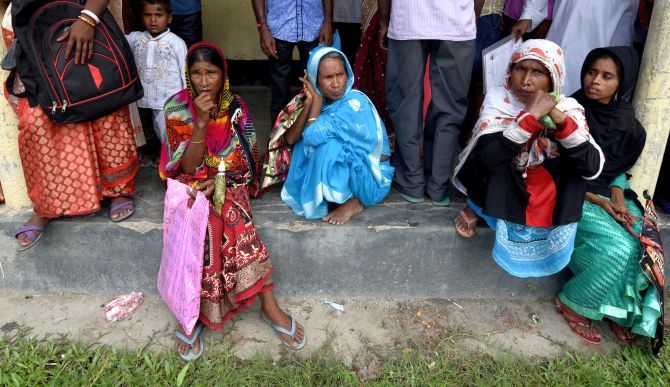 IMAGE: Villagers wait outside the NRC centre to get their documents verified by government officials at Mayong Village in Morigaon district in Assam. Photograph: Stringer/Reuters

He, however, clarified that people belonging to four categories were not included in the draft as their eligibility were put on hold by the Supreme Court.

Without sharing further details, he stated that there are names which were included in the first draft but have been deleted from the complete one and they will be intimated through individual letters in the coming days.

When inquired if any person, who appeared in the complete draft, could be excluded from the final list once the process of claims and objections were over, the RGI replied in the affirmative.

Talking about the status of people who were excluded from the list, Union Home Ministry Joint Secretary (North East) Satyendra Garg said, "We are not calling them Indians or non-Indians. At present, no action will be taken as the claims, objections and correction process has to be undertaken."

The authorities will not forward any name to the Foreigners Tribunals on the basis of the complete draft and the government's focus is to maintain peace and order in the society, he added. 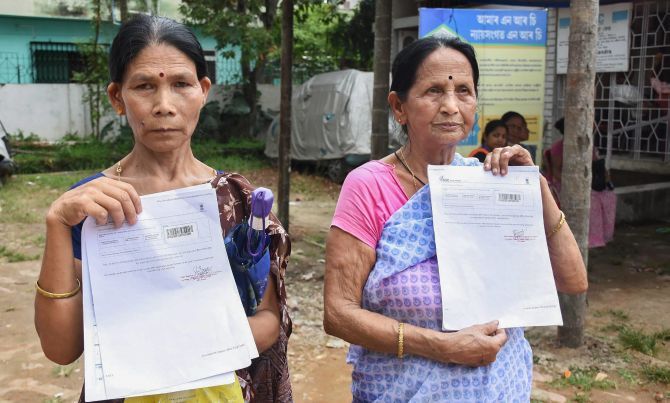 IMAGE: Maya Devi Sonar, left, and Malati Thapa, residents of Hatigaon, show documents outside the NRC Seva Kendra claiming that their and their family members’ names were not included in the final draft of the states NRC, in Guwahati on Monday. Photograph: PTI Photo

Allaying fears, Sailesh also said, “It is only a draft NRC, not the final one. The claims and objections process will begin on August 30 and continue till September 28. Adequate, ample scope will be given to people for their objections. No genuine Indian citizens should have any fear.”

He also said that a status quo will be maintained until the final NRC is published, the timing of which will be decided after assessing the volume of review applications.

Another senior MHA official said that the process of claims and objections to the draft NRC will start from August 30 and continue for a month.

The process if required can be also extended by another month, he said.

The process of claims and objections to the NRC will start on August 30 and the date was fixed taking into consideration that those whose names are not part of the draft NRC can gather documents in the next one month and prepare to approach NRC authorities, the official said.

The window of claims and objections will be from August 30 to September 30 and if required NRC authorities may extend the period by another month -- till October 30, he said.

During the period, no coercive action will be taken against anyone, the official said.

Assam is the first Indian state where the NRC is being updated after 1951, with March 24, 1971 as the cut-off date, to include names of genuine Indian citizens.

The first draft of the NRC was published during the intervening nights of December 31 and January 1 this year, containing 1.9 crore names. 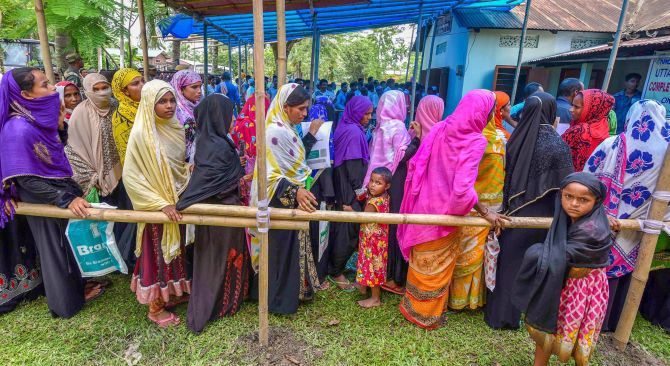 Hajela accepted that some documents, which were sent for verification to other states, did not return and the NRC authorities had to device their own mechanism for confirming the details.

Asked about alleged ‘campaigns’ against the NRC, RGI Sailesh said, “We have taken up this propaganda issue against NRC with the Centre. The government has informed the agencies concerned, which are taking necessary steps."

The RGI also told reporters that the Centre had approved a total outlay of Rs 1,220 crore for the NRC. The groundwork for this mammoth exercise began in December 2013 and so far over 40 hearings have taken place in the Supreme Court in the last 3.5 years.

The process of filing applications started in May 2015 and altogether 6.56 crore documents were received from 68.31 lakh families across Assam.

During the updating process of the NRC, a total of 62,614 people were involved, of which 52,038 were government employees.

Over 50 software applications were developed for the process by IT professionals, while 102 people in the NRC call centre received 10.68 lakh calls during the application phase. 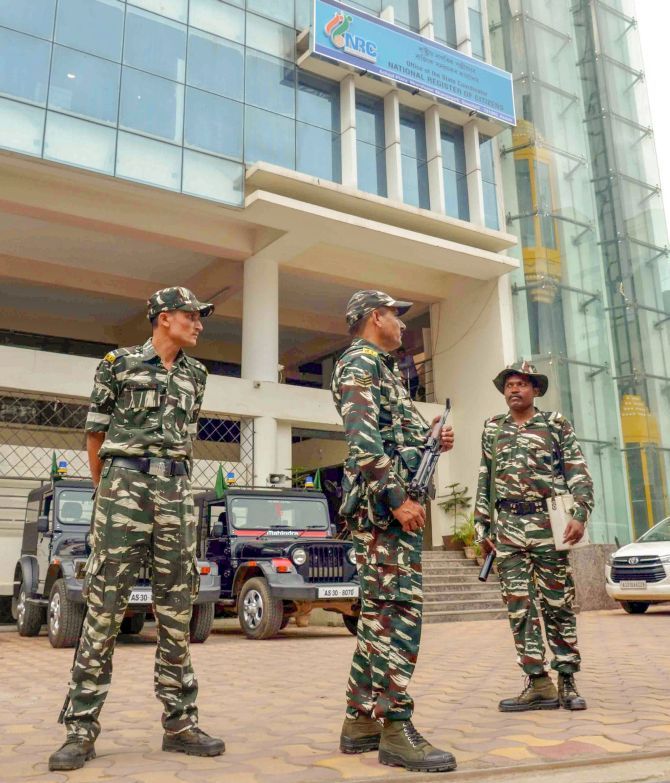 IMAGE: Security personnel guard in front of the NRC office at Bhangagarh in Guwahati on Sunday. Photograph: PTI Photo

Minutes after release of the final draft, Union Home Minister Rajnath Singh said the exercise was carried out in an ‘impartial and transparent’ manner.

"No coercive action will be taken against anyone. Hence, there is no need for anyone to panic," he told reporters in New Delhi.

West Bengal Chief Minister Mamata Banerjee hit out at the Centre, accusing it of resorting to ‘vote bank politics’.

"This divide and rule policy will finish the country", she said.

Banerjee also claimed that names of people who have passports, Aadhaar and voter cards have also been excluded from the final draft.

Chief Minister Sonowal said that no one should spread misinformation about the NRC.

"A government is there in Assam to look after people's interest. You have seen all are living here with unity and honour," he added.

"Assam is a very peaceful state. We are confident that all sections of society will come forward to maintain peace and tranquillity.

"For this remarkable feat, I extend my heartiest congratulations to the 55,000 officials engaged in the NRC updation process and the people living across the Barak and Brahmaputra valleys, plains and hills of the state," he said.

The chief minister expressed confidence that the NRC, which has become the ‘instrument to safeguard the interest of greater Assamese society’, would be able to pave the way for realising the hopes and aspirations of the genuine Indian citizens.

Sonowal also urged people not to panic if their names did not appear in the second draft as genuine Indian citizens would get ‘full opportunity’ to make claims and objections.

The NRC will include the names of all Indian citizens who have been residing in Assam before March 25, 1971.

‘Govt is not doing anything:’ Rajnath asks Opposition not to politicise NRC issue Amid opposition uproar over the publication of the National Register of Citizens in Assam, Home Minister Rajnath Singh on Monday asked parties opposing it not to politicise the “sensitive” issue.

The minister told the Lok Sabha that the list has been published on the directives of the Supreme Court and the Centre has no role in it.

The opposition – Trinamool Congress, Congress, Communist Party of India-Marxist and Samajwadi Party criticised the government over the publication of the list, saying it puts “human rights and democratic rights” of people at stake.

Over 40 lakh people in Assam have been left out from the the NRC, which is being prepared to identify illegal migrants in Assam. The second draft of the NRC was published on Monday in Guwahati.

Singh said the NRC was demanded in Assam for a long time and the previous state government had set up foreign tribunals following the Supreme Court order.

“In publishing NRC, the government has done nothing. Everything is being done as per Supreme Court order. The allegation of the opposition against the government is
baseless,” Singh said.

He appealed to opposition members not to create “panic” since it is a “sensitive issue”.

“The government is not doing anything. Whatever is happening is under the supervision of the Supreme Court,” Singh said.

Singh said the NRC list published is not the final list and applicants will have the option of raising claims and objections.

Asking the opposition to list out what role the government has played in the NRC, Singh said, “It is a sensitive issue and should not be politicised unnecessarily”.

Unsatisfied with the minister’s response, an unrelenting opposition staged a walkout from the House.

Asking where the 40 lakh people will go, Sudip Bandyopadhyay of the TMC asked the Centre to ensure that justice should not be denied to the people who have been living in Assam for decades now.

“It is inhuman and is a torture on people. I request the Centre that amendments be moved so that these 40 lakh people get to stay in Assam,” he said.

Congress leader Mallikarjun Kharge said “original citizens” of the state are being asked questions and this is creating division in the state based on caste and creed.

Mohd Saleem of the CPI-M said the situation in Assam is fragile and “human rights and democratic rights” of the people of the state are at stake.

SP’s Jaiprakash Narayan Yadav said the move would lead to “hatred” and “violence” in Assam and dubbed it as a “war on people” who are living in the state for the last 40 years.