The Mizoram government on Monday alleged that Assam Police personnel opened fire on the state's security forces and civilians, prompting retaliatory action, as tension flared along the inter-state border. 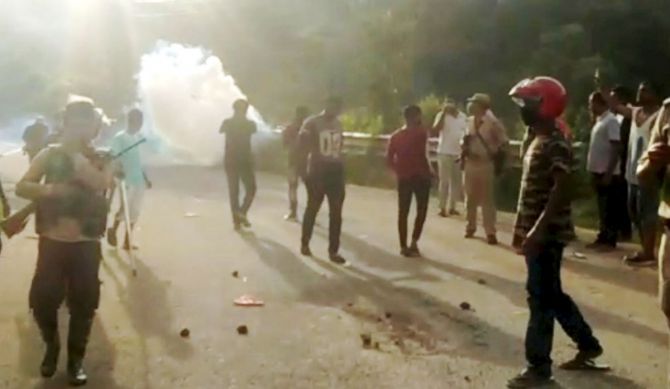 IMAGE: Police personnel during a clash at Assam-Mizoram border at Lailapur in Cachar district, on Monday. Photograph: PTI Photo

At least six Assam police personnel were killed and 50 others, including a superintendent of police, injured in the clashes on Monday in a sudden escalation of the border dispute between Assam and Mizoram that also saw the two chief ministers engaging in a public spat, blaming each other's police for the violence and seeking the Centre's intervention.

The development comes days after a meeting of chief ministers of northeastern states chaired by Union Home Minister Amit Shah in Shillong, during which the border issue was raised.

"We had no other choice but to retaliate in self defence," he said.

"They even overran a Central Reserve Police Force duty post in Vairengte," he claimed.

The Mizoram government later issued a statement condemning the incident, and called upon authorities in Assam to create a congenial environment for peaceful resolution of the dispute.

Mizoram Home Minister Lalchamliana said around 200 armed Assam Police personnel arrived at the Vairengte auto-rickshaw stand around 11.30 am on Monday.

"... A volley of tear gas canisters and grenades were launched at Mizoram Police followed by firing from Assam side around 4.50 pm. Mizoram Police responded spontaneously by firing back in spite of the fact that Kolasib District SP was still inside the CRPF duty camp negotiating with the Assam Police authorities," Lalchamliana said.

He also accused Assam Police personnel of causing damage to several vehicles that were travelling along the National Highway between Vairengte and Lailapur in Assam.

'Upon learning of the arson... residents of Vairengte town proceeded to the site to inquire. The unarmed civilians were assaulted by Assam Police by resorting to lathicharge and firing tear gas, thereby causing injuries to several civilians,' the minister said in the statement.

The Mizoram government 'strongly condemns the unjustified act of the Government of Assam in this intrusion and aggression into the territory of Mizoram', he said.

'The Government of Mizoram deeply regrets the needless injuries on both sides which could have been avoided and wishes a speedy recovery to all those injured,' Lalchamliana said.

He added that Assam Police later withdrew from the site and the duty post was handed back to the CRPF following the intervention of Union Home Minister Amit Shah, who spoke to the chief ministers of both states.

Earlier in the day, Khiangte had said eight unoccupied farm huts were set ablaze by unidentified miscreants on Sunday night near the Mizoram-Assam border.

Meanwhile, chief ministers of both states clashed on Twitter over the violence along the inter-state border.

In reply, Assam Chief Minister Himanta Biswa Sarma said: 'Honble @ZoramthangaCM ji, Kolasib (Mizoram) SP is asking us to withdraw from our post until then their civilians won't listen nor stop violence. How can we run government in such circumstances? Hope you will intervene at earliest.'

Sarma, however, said in another tweet that he has spoken to Zoramthanga and reiterated that Assam will maintain status quo and peace along the border.

The situation along the Mizoram-Assam border has been on the boil since June-end when Assam Police allegedly took control over an area known as 'Aitlang hnar' about 5 km from Vairengte, accusing the neighbouring state of encroaching on its territory.