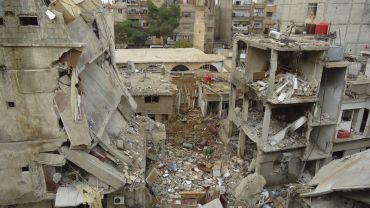 Facing popular revolt, the authoritarian Assad regime of Syria has launched Scud missiles against the rebel-held target areas in the northern parts of the country, according to a media report.

The White House refrained from confirming it, but termed it as a desperate attempt; while the state department noted that in recent days it has seen "missiles are deployed" by Assad regime, but would not go into the details of it.

Syrian military units loyal to the Syrian president, Bashar Assad, launched at least five Scud missiles from the Damascus area toward rebel target areas in the north, ABC news reported citing US officials, noting that this appears to be the first time that the Soviet-era short-to-medium-range missiles have been used against rebels in the two-year conflict.

According to another second official, three Scud missiles were launched early Monday at an area west of the northern city of Aleppo. An additional two missiles were fired later that afternoon, the news channel said.

"I cannot confirm this story. I have seen it. Nor can I discuss intelligence, as you know. But if true, this would be the latest desperate act from a regime that has shown utter disregard for innocent life, utter disregard for the lives of its own citizens," the White House Press Secretary Jay Carney told reporters at his daily news conference on Wednesday.

The idea that the Syrian regime would launch missiles within its borders at its own people is stunning, desperate, and a completely disproportionate military escalation, he observed.

"What is clear is that the regime's efforts to defeat militarily the opposition are failing. The opposition is becoming more unified, more organised. In fact, there is an international conference this week to further help the opposition as it organises and unifies, and the sooner that Assad goes the better it will be for the Syrian people," he said.

A day earlier the US President Barack Obama had announced his decision to recognise the Syrian Opposition Coalition as the legitimate representative of the Syrian people.

"We are working with our international partners to help strengthen the opposition and to further isolate and sanction the Assad regime. If this proves to be true, it's just another indication of the depravity of Assad and his cronies," Carney said.

Meanwhile, the US State Department spokesperson Victoria Nuland told reporters at another news conference that as the regime becomes more and more desperate, it is resorting to increased lethality and more vicious weapons moving forward.

"We have in recent days seen missiles deployed. I'm not going to comment, because it's going to take me into intelligence, in terms of precise kinds of missiles

"We are seeing use of another egregious weapon, this kind of barrel bomb, which is an incendiary bomb that contains flammable materials. It's sort of a napalm-like thing, and it's completely indiscriminate in terms of civilians, so very, very concerning and indicative of the regime's desperation and the regime's brutality," Nuland said.

However, she refused to confirm if this was a Scud missile.

"I'm not in a position to talk about the types of missiles that we're seeing other than to confirm that there are missiles now being deployed," she said.

"We have said all along that in the absence of any moves by the regime to end this, in the absence of any commitment to any kind of a transition, we're going to continue to support the opposition as we can, and we're going to continue to take steps to strengthen them. That's what we've done here with this political recognition of the Syrian Opposition Council as the legitimate representative of the Syrian people," she said.

The US official said that the Syrian Opposition Council has made much progress in establishing organisational structures and making connections with the political opposition on the ground.

"It also will give us the opportunity to better direct the non-lethal assistance that we are providing so that it can get directly to political leaders on the ground in the local coordinating councils, particularly in those areas of Syria that have now been liberated from regime control, and where these local coordinating councils are taking on functions of having to provide basic services, et cetera," she said.

The United States would help strengthen a political opposition that's committed to a democratic transition in Syria, Nuland said.

Image: Buildings in Daraya damaged by what activists said were missiles fired by a Syrian Air Force fighter jet.