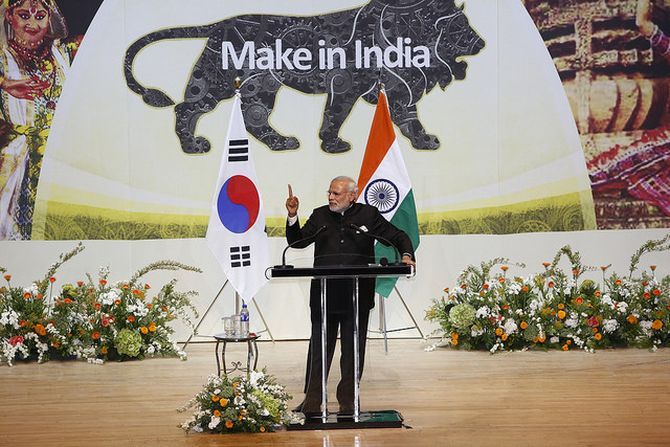 Prime Minister Narendra Modi on Tuesday sought unity among Asian countries and said they must work as Asians to shape the world and reform the global institutions of governance, including the United Nations.

"If Asia must rise as one, Asia should no longer think of itself in regional fragments," Prime Minister Modi said at the VI Asia Leadership Conference in South Korean capital Seoul.

Noting that Asia of rivalries will hold the continent back, he asked the Asian countries to draw upon their shared heritage and youthful energy to pursue a common purpose.

"Asia of unity will shape the world," Modi said, adding that India seeks an Asia of shared prosperity, where the success of one nation becomes the strength of the other.

"We must work as Asians to reform the global institutions of governance, including the United Nations and its Security Council," he said, underlining that Asia's re-emergence is the greatest phenomenon of this era.

Prime Minister Modi said India's progress will be Asia's success story and it will help to make the Asian dream a bigger reality.

“My Asian dream is one in which all of Asia rises together...The future I dream for India is the future I seek for our neighbours. Our growth must be more inclusive within and across nations," said Modi, who is here on the last leg of his three-nation tour that also took him to China and Mongolia.

Noting that India is located at Asia's crossroads, the prime minister said, "We will assume our responsibility to build inter-connected Asia."

Modi said as some of the countries in Asia become more prosperous they must be prepared to share their resources and markets with those who need them.

"This is the obligation of national governments but also a regional responsibility," he added.

Modi lauded Korea as a "pillar of democracy" and said Korea's economic miracle and global leadership in technology has made the promise of the Asian Century more real.

"It is now India's turn to sustain Asia's success... India's potential has never been in doubt. And, in the course of the past year, we are translating promise into a reality; hope into confidence," the Prime Minister said.

He said India's growth has rebounded to 7.5 per cent per year and the prospects of further increase are strong.

"The world speaks in one voice that India is the new bright spot of hope for our region and the world. The progress of one-sixth of humanity will also be an opportunity for the world. It will also give India the capacity to do more for our world," he told the gathering of Asian leaders.

Modi said Asia will succeed more when all of Asia rises together. "It must not be a continent of nations on the rise and others in decline; of regions with stability and others with broken institutions."

He said youth should be empowered with skills and education so that they can look to the future with hope.

"Over the next 40 years, three billion Asians will lift themselves into a higher level of prosperity. Asia's prosperity and rising population will place a huge demand on our limited resources," he said, adding that our footprint on earth must become lighter as our economic weight increases.

Stating that combating climate change is in Asia's enlightened self-interest, he said India has set a goal of 175 Giga Watts of new renewable energy capacity over the next five years. "But, coal and oil will remain the key source of energy for all of us for a long time to come," he said.

"We must connect our regions through infrastructure and integrate them through trade and investments. We must also do everything possible to secure lasting peace andstability for Asia. We must build institutions that promote cooperation on the principles of equality, co-existence and international rules and norms," the prime minister said.

"It is also our collective task against our common challenges -- terrorism; trans-national crimes; natural disasters and diseases," he added.

V Mohan Narayan in Seoul
© Copyright 2020 PTI. All rights reserved. Republication or redistribution of PTI content, including by framing or similar means, is expressly prohibited without the prior written consent.