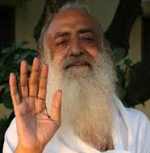 A camp set up at Kumbh Mela ground for Asaram Bapu's discourse was vandalised while several outfits have opposed the proposed visit of the self-styled godman, who has drawn flak for his remarks on the Delhi gang rape victim, at the religious congregation in Allahabad.

The gateway to the grandiose camp, where the godman is likely to stay and deliver "pravachans" for three days, was vandalised and set afire on Wednesday. However, police claim that it was not clear who were responsible for the incident.

The godman is scheduled to visit the city on January 14 to take part in the Maha Kumbh congregation.

A number of religious organisations like Sannyasi Parishad, Akhil Bharatiya Sant Mahasabha and Akhil Bharat Purohit Mahasabha have issued statements asserting that they will oppose the visit of Asaram. His recent statements that the rape victim could have saved her honour by having begged for mercy before the perpetrators have sparked a furore. However, he chose to stick to his views and invidiously dismissed the critics as "dogs who bark while an elephant goes his way".

His stance has not gone well with spiritual gurus like Swami Chidananda.

"It is true that not just our environment, but also our society has become polluted. Cleansing is necessary to bring about order and harmony." "Nevertheless, what Bapu said was in no way appropriate. Religious gurus are supposed to propagate Dharma, thereby guiding the society, and not to offend anybody," Chidananda told reporters in Allahabad.

Meanwhile, a number of other groups including political outfit Apna Dal and social organisations Nari Sashaktikaran Abhiyan and Jan Sangharsh Morcha have declared that they will show black flags to Asaram on his visit to the city and may even seek legal action against him unless he tendered an "unconditional apology".