Cyclone Asani, formed over the southeast Bay of Bengal, further intensified into a severe cyclonic storm on Sunday evening as it moved northwestwards in the direction of north Andhra Pradesh-Odisha coasts, the Met department said. 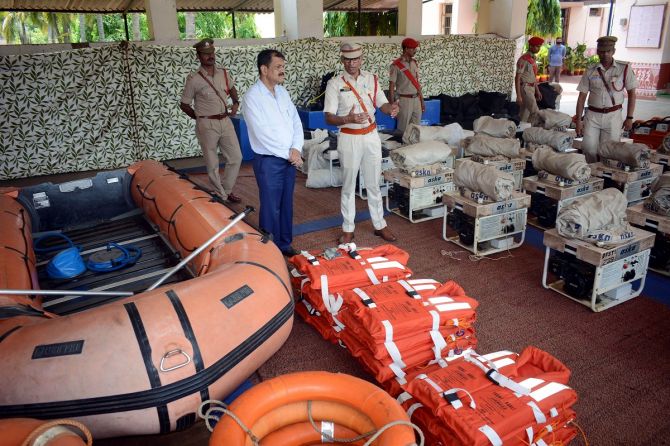 The severe cyclonic storm is very likely to lose some steam thereafter and turn into a cyclonic storm on Wednesday and further into a deep depression on Thursday, the Met department said in its forecast of Asani's track and intensity.

Stating that the system will not make landfall either in Odisha or Andhra Pradesh, India meteorological department director-general Mrutunjay Mohaptra said the cyclone will move parallel to the east coast and cause rainfall from Tuesday evening.

"We do not see any big danger in the state as the system will pass around 100 kilometer off the coast near Puri," he said.

However, rescue teams of NDRF, ODRAF and Fire Services are on standby for any eventuality, he said.

A unit of NDRF has been deployed in Balasore and a unit of ODDRAF was sent to Ganjam district.

ODRAF teams are also on standby in Krushna Prasad, Satpada, Puri and Astarang block in Puri district, and Jagatsinghpur, Mahakalpada and Rajnagar in Kendrapara, and Bhadrak.

All the districts have been put on alert and collectors have been empowered to undertake evacuation, keeping in view the local situation, Jena said.

Director-general of Odisha's Fire Services SK Upadhaya said all the 339 fire stations have been put on alert.

"Rainfall activities will commence in the coastal districts from Tuesday evening under the impact of the cyclone," said Umashankar Das, senior scientist at Bhubaneswar Meteorological Centre. 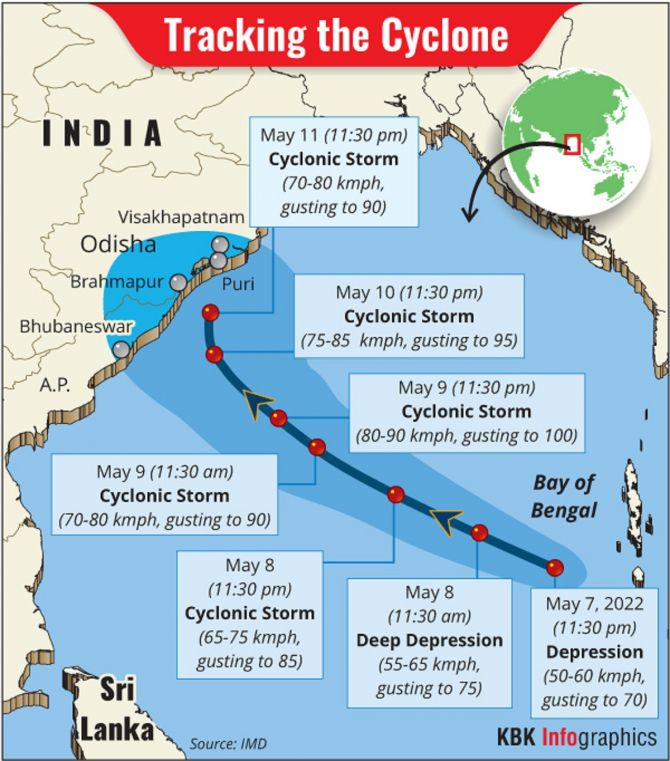 The cyclone is likely to bring in its wake light to moderate rainfall over Gangetic West Bengal from Tuesday to Friday with heavy downpour at one or two places in the coastal districts of the state, the weather office said.

Taking lessons from the devastating effects of Amphan super cyclone in May 2020, the Kolkata Municipal Corporation is taking all measures such as keeping cranes, electric saws and earthmovers on standby to clear blockades caused by fallen trees and other debris.

The administrations of Purba Medinipur, South 24 Parganas and North 24 Parganas are keeping cyclone shelters, schools and other pucca structures ready if evacuation is needed, besides arranging dry food and necessary medicines, a state government official said.

The weather office advised fishermen not to venture into the sea and along and off West Bengal and Odisha coasts from Tuesday till further notice.

The system developed from a cyclonic circulation that formed over the South Andaman Sea on May 4 and gradually intensified into a low-pressure area and then into depression and deep depression as it moved northwestwards, leading to the formation of cyclonic storm Asani.