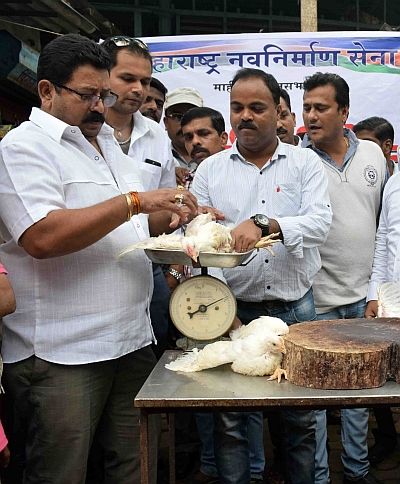 Wrangling over the ban on sale of meat by the Brihanmumbai Municipal Corporation during the Jain fasting period of ‘Paryushan’ spilled on to the street on Thursday with Shiv Sena and Maharashtra Navnirman Sena setting up stalls to sell meat in defiance of the order in busy Dadar area.

The Raj Thackeray-led MNS set up a stall to sell chicken meat as a symbolic protest, whereas Shiv Sena workers tore off the civic body notices declaring the ban on meat for four days in Mumbai on September 10, 13, 17 and 18, when members of the Jain community observe a religious fast.

While the Bharatiya Janata Party defended the ban, its ally Shiv Sena as well as opposition MNS and Congress and the Nationalist Congress Party have vehemently opposed it, alleging the move as a BJP ploy to polarise voters and appease a section of society before the crucial civic body polls in early 2017.

In its newspaper, the Saamna, the Sena slammed the Jains for their insistence on banning the sale of meat during Paryushan. Shiv Sena on Thursday said the community’s stance on practising “non-violence” comes as a surprise now as they purportedly supported violence during the 1993 riots in the city.

The party accused the Jains of doing a volte-face for altering their position on “non-violence”.

“Until now, only fanatic Muslims used to bully people in the name of religion. If the Jains too are going on the path of Muslims, then God save them. During the 1992-93 Mumbai riots, Marathis had protected Jains, who were saved because violence had been answered by violence. At that time too ‘Paryushan’ was on. But Jains were at the forefront of supporting violence then,” the Sena said in an edit in its mouthpiece Saamna.

“Scores of Jains used to come to Matoshree then and thank (late Sena Supremo) Balasahab then for helping them. Today these people talking about non-violence...its surprising. What caused this sudden change of heart?” the Sena questioned.

The party said that it needs to be made clear what does violence exactly mean.

“Does only banning slaughter of animals mean non-violence? Violence is in the mind and in the action. Are Jain brothers free from this kind of violence? Many builders in the city are Jains where the game of black and white money is being played. Accepting black money too is a sin. Will Jains stop taking black money in this festival?” the Sena said.

It said that to think that only Jains are vegetarians was wrong.

MUST READ: The man who inspired the meat ban in Mumbai

“Do not provoke Maharashtra in the name of Paryushan. Believe in the mantra of live and let live and let people eat what they want to,” the Sena said

MNS corporator Sandip Deshpande, who participated in the protest, said, “We are selling meat in Dadar area along with Shiv Sena workers, when police suddenly came there and started pushing and shoving us, later they detained us. But we will continue our agitation against the ban till the government and the civic body revoke the order,” he said.

Deshpande said the party would set up meat stalls across the city on all the days of the ban.

BJP leaders, however, defended the decision holding that this had been there for long and it was wrong to blame the party-led state government.

The party leaders rejected the charge that this was a decision to appease the affluent Jain community, whose members control much business in the city.

The Bombay high court on Thursday said imposing a ban on animal slaughter and sale of meat for four days during the Jain festival ‘Paryushan’ is not feasible in a metropolitan city like Mumbai and sought response from the state and the municipal body on a petition challenging it.

A division bench headed by Justice Anoop Mohta was hearing a petition filed by Bombay Mutton Dealers Association challenging Brihanmumbai Municipal Corporation’s decision to ban the sale of meat for four days -- September 10, 13, 17 and 18 -- during the festival.

While the ban on September 10 and 17 was as per government’s directives, the Shiv Sena-Bharatiya Janata Party run BMC imposed it on 13 and 18. The ban covers only the sale of mutton and chicken.

“Mumbai is a metropolitan city. Such straight ban on meat cannot be a formula. Ban is on slaughter and sale of the meat. What about other sources? What about packaged meat that is already available in the market?” the court asked.

The court suggested if the Jain community had a problem with animals being slaughtered in the open and displayed in shops, a direction can be issued against it.

The court posted the matter for hearing on Friday and asked the state government and BMC to file short affidavits.

The court also sought to know from the civic body under which provision of law it imposed such a ban.

The petitioners have claimed that the decision is unconstitutional as it affects the livelihood of a section of people and favours a small percentage of population. It also goes against the secular fabric of the constitution, they have said. 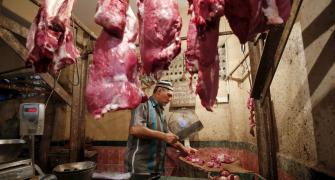 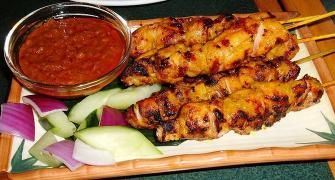 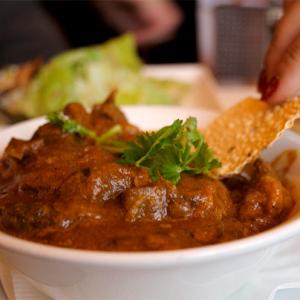