Aryan Khan's bail plea to be heard on Oct 13

A special court here on Monday said it would hear the bail application of Bollywood superstar Shah Rukh Khan's son Aryan Khan, arrested in connection with the seizure of banned drugs onboard a cruise ship, on October 13 and directed the Narcotics Control Bureau (NCB) to file its reply on that date. 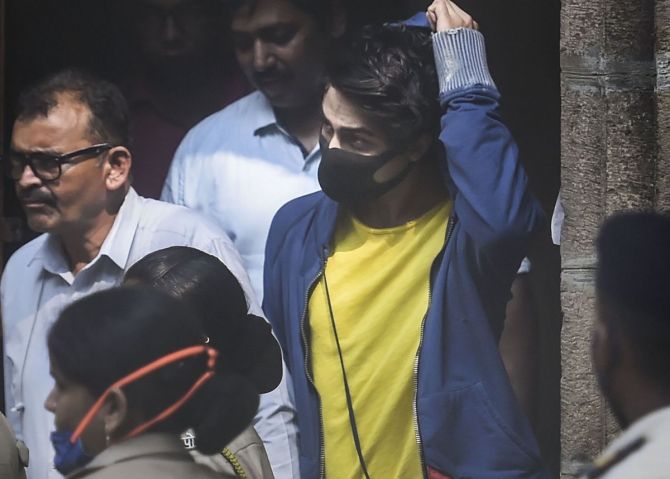 Special Judge V V Patil, hearing matters related to the Narcotics Drugs and Psychotropic Substances (NDPS) Act, said the court would hear the bail plea on Wednesday after the NCB said there was "no extreme urgency" to hear the application and sought a week to file an affidavit. The defence said Aryan Khan was "falsely implicated" and releasing him on bail would not stop the probe.

Aryan Khan was arrested on October 3 after the NCB raided a Goa-bound cruise ship off the Mumbai coast and claimed to have recovered drugs from some persons. He is currently in judicial custody and lodged at the Arthur Road prison in Mumbai.

He approached the special court for bail on October 8 after his plea for the same was rejected by a magistrate's court last week on the ground that it did not have the jurisdiction to decide the matter.

In his plea, Aryan Khan said he was innocent and has not committed any crime and that he has been falsely implicated in the case.

“There is nothing on record to suggest that the present applicant (Aryan Khan) is in any way connected with the production, manufacture, possession, sale, purchase, transport, import, export or use of any psychotropic substance or the financing, illicit trafficking and/or harbouring of offenders in relation to any narcotic drugs,” the bail application said.

It added that no incriminating contraband drugs or any other material were recovered from Aryan Khan and that he had strong roots in the society and hence there was no likelihood of him absconding or fleeing from justice.

On Monday, when Aryan Khan's counsel Amit Desai mentioned the bail plea, NCB's advocates A M Chimalkar and Advait Sethna sought a week to respond and file their affidavit.

They said the investigation in the case was still on and there was quite a lot of material collected by the agency and at this stage, it needs to be seen if releasing Aryan Khan on bail would hamper the probe into the case.

Desai, however, objected to it, saying a person's liberty is at question here and argued that releasing the accused on bail would not stop the investigation in the case.

"The bail will not stop the investigation. The NCB can continue their probe. That is their duty. But, keeping my client (Aryan Khan) in custody, especially when there has been no recovery (of drugs) from him, is not required," Desai said.

"He (Aryan) has not been found in possession of any narcotics and there is no other material against him. Since his arrest, he has been in the custody of the NCB for a week and his statement was recorded twice. Why does he still need to be in jail?" the senior counsel argued.

“This is a case of no evidence at all,” Aryan Khan's bail application said.

The application further said that the NCB has mechanically and without application of mind applied the provisions of the NDPS Act against Aryan Khan without any evidence or material to corroborate the same.

“There has been no recovery from the present applicant (Aryan Khan). Without prejudice to the same and taking the allegations as such, at the most the allegations would squarely fall within the ambit of section 20(b)(ii)(A) (pertaining to sell or purchase of narcotics) of the NDPS Act which is punishable with a maximum imprisonment of up to one year or with fine,” the application said.

Chimalkar, however, said that the agency needs at least a few days to file its reply.

"What Desai is arguing appears to be rosy, but this is not what the investigation reveals or divulges. Aryan Khan is in judicial custody. Whether his release on bail will affect or hamper our investigation needs to be seen," Chimalkar said.

Sethna, appearing for NCB, told the court that there was no extreme urgency for the bail plea to be heard immediately.

Desai then sought the court to hear and decide Aryan Khan's plea separately, saying the recovery of drugs from each accused in the case was different.

“Recoveries from other accused persons cannot be held against the present applicant (Aryan Khan) and it cannot be used against him,” the application said.

But, Chimalkar and Sethna opposed it and said the conspiracy is the same.

Aryan Khan's application stated that the prosecution was relying solely upon certain alleged WhatsApp chats to entangle him in the present proceedings without the veracity or accuracy of the chats being established.

"In addition, there is nothing to suggest that these alleged chats have any connection whatsoever to the case that is presently being investigated," it said.

The NCB had last Monday claimed before a city court that "shocking and incriminating" material was recovered in WhatsApp chats of Aryan Khan and two others who were among the nine people arrested in connection with the seizure of banned drugs showed international drug trafficking which needs to be probed.

The federal anti-drugs agency had also claimed that in the WhatsApp chats Aryan Khan is discussing modes of payment to be done for procurement (of drugs) and that several code names are being used.

The court said it would start hearing Aryan Khan's bail plea on Wednesday.

The NCB has so far arrested 20 people in the case.

Aryan Khan has been charged with offences under Sections 8(c), 20(b), 27, 28, 29 and 35 of the NDPS Act about the possession, consumption and purchase of drugs.