Activist Arvind Kejriwal on Saturday said that most of the current political parties have lost credibility and hence people are yearning for a new alternative, which he and his team are seeking to provide.

"People in India now want a new political alternative which has a vision and is honest in its intent. This is because most of the present political parties in the country have lost their credibility and people are demanding active political participation from us," he said.

Kejriwal was in Ralegaon Siddhi in western Maharashtra to meet anti-corruption crusader Anna Hazare along with his associates Manish Sisodia and Dinesh Waghela.

While Hazare has maintained that he will neither form a political party nor fight elections, members of his now dissolved Team Anna have decided to make electoral foray.

Talking to PTI, Kejriwal said there are no fundamental differences in his team members as their motive was the same.

"A meeting will be organised on September 17 to discuss broad contours about contesting elections. The details of selected candidates for the 2014 Lok Sabha polls will be displayed on our website and common people can comment on the selection," the Magsaysay award winner said.

Later, the selected candidates have to give an affidavit pledging not to use government bungalows, official car, security and other facilities if they are elected, he said.

All candidates will have to give details of property and an undertaking that they will not take honorarium of more than Rs 25,000, Kejriwal added.

In a statement issued in New Delhi, Kejriwal-led India Against Corruption said they will conduct a nationwide survey on the issue of a political alternative.

The statement said they will collect opinion from the masses through various media outlets and inform Hazare about people's views on the issue.

"Then Anna Hazare will announce an important decision regarding the political alternative," it said.

Hazare had expressed concern about selection of candidates for polls, it said, claiming that during his meeting with Kejriwal and others on Saturday, he said he has no faith in the existing political system.

"None of the existing parties is ready to bring the Lokpal Bill and it will be passed only if honest and responsible people enter Parliament," it quoted Hazare as saying.

Hazare also said the candidates should take a pledge that they will not take more than Rs 25,000 as salary or perks or bungalow or beacon light vehicles or security, it said.

He also wanted the elected representatives to make public their bank accounts as well as their annual income. Hazare said he will support those candidates who take a pledge on these issues, the statement noted.

"Anna wants to know what people think about this and has asked us to get the views from the public through means like SMS, mails, website and other modes," it said. 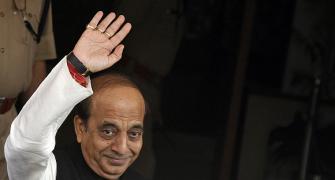 'Railways is not the property of a person or party'