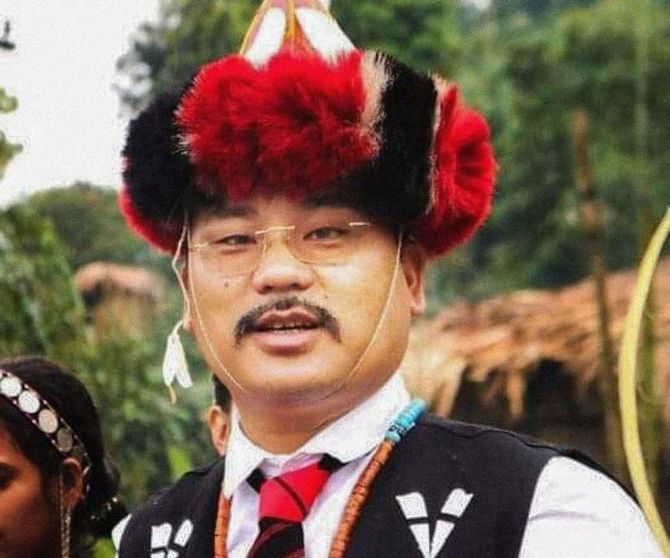 In a brutal attack, suspected National Socialist Council of Nagaland militants on Tuesday gunned down sitting MLA and National People's Party assembly poll candidate Tirong Aboh and 10 others, including his son and two security personnel, in Tirap district of Arunachal Pradesh, a top police officer said.

Aboh, 41, was on his way to his constituency from Assam, along with son Longgem, other family members, four personal security officers and a poll agent in a convoy of four vehicles when the suspected NSCN rebels opened fire at them near 12 Mile area in the district at around 11.30 am, Director General of Police S B K Singh.

"Of the 15 people in the convoy, 11 were killed on the spot, two have been admitted to a hospital with serious injuries and two others escaped unhurt. The bodies have been sent to a district hospital for postmortem," the DGP told PTI.

Aboh, who represented Khonsa West constituency, was seeking re-election from the seat.

Apart from Aboh's son, the deceased included some other family members of the MLA.

Expressing shock and anguish over the attack, Union Home Minister Rajnath Singh termed it as an 'outrageous attempt' to disturb peace and normalcy in the Northeast.

'The perpetrators of this heinous crime will not be spared. My condolences to the bereaved families,' Singh said in a tweet.

His deputy Kiren Rijiju also demanded strongest possible action against those responsible for the dastardly attack.

'The NPP is extremely shocked and saddened by the news of the death of its MLA Shri Tirong Aboh (Arunachal Pradesh) and his family. We condemn the brutal attack and urge @rajnathsingh and @PMOIndia to take action against those responsible for such attack,' Sangma tweeted.

Initial reports suggested that seven people were killed in the attack, but the DGP put the death toll at 11 later in the day.

Army units have launched massive combing operations in the area to nab the perpetrators, Singh said, adding Deputy Inspector General of Police (East), IGP (Law & Order) and senior police officers of Tirap and neighbouring Changlang districts have reached Khonsa to supervise and coordinate with various security agencies for the operations.

'Extremely shocked by unfortunate incident of killing of Khonsa MLA Tirong Aboh along with several others by insurgents. Strongly condemn this barbarous act. Action will be initiated to hunt down the perpetrators. My heartfelt condolence & may soul of those departed Rest In Peace,' he tweeted.

Meanwhile, the Arunachal Pradesh Congress Committee alleged that the ruling Bharatiya Janata Party was responsible for the 'prevailing lawlessness and chaos' in the state and demanded a judicial inquiry into the incident.

"If elected representatives are not safe under the present dispensations at the Centre and the state, how can common people feel secure," the party said in a statement.

"Chief Minister Pema Khandu and his BJP government are solely responsible for lawlessness and all chaos in the state."

Aboh was elected from the Khonsa West seat in 2014 on a Peoples' Party of Arunachal ticket.