News
Business
Movies
Sports
Cricket
Get Ahead
Money Tips
Shopping
Sign in  |  Create a Rediffmail account
Rediff.com  » News » Arunachal crisis: We can set the clock back, says SC to Congress

The Supreme Court on Monday refused to pass an interim order on a fervent plea of the Congress against "illegal" swearing-in of its rebel leader Kalikho Pul-led government in Arunachal Pradesh, saying it can "set the clock back" if the governor's actions are found unconstitutional.

"Don't mix up too many things. If you mix up to much, then it would be difficult to compartmentalise. I think you (lawyers) all know that we can put things back...have you not read that passage of S R Bombai judgement," the apex court said when senior lawyer F S Nariman sought an interim order by referring to subsequent developments in the crisis-hit state where Pul was sworn in as chief minister late Friday night.

The bench, which reserved its verdict on a batch of petitions dealing with discretionary powers of the governor to summon or advance the assembly sessions, said it had the powers to undo the damage.

"We can't get into all this. We should not do this, but this court has the power to set things right. This court has done this before. If we agree with you, we can set the clock back. Let them do whatever they want want to," a five-judge constitution bench headed by Justice J S Khehar said.

The bench, however, segregated two other sets of petition which were filed against the subsequent promulgation of President's rule in the state and its revocation thereafter which led to the formation of a new government.

It has now fixed these pleas for hearing after the pronouncement of verdict on petitions dealing with governor's discretionary powers in advancing the assembly session and setting the agenda of the House. The bench is hearing a batch of pleas on constitutional powers of governors.

Another senior lawyer Kapil Sibal, appearing for Arunachal Congress leaders, endorsed Nariman's view and added that the swearing-in of the government led by Pul would create "a new kind of methodology of toppling governments".

Observing that Pul was a Congress MLA who has been sworn-in as the chief minister without any communication from the party, he apprehended that soon the House may be dissolved which would ultimate render the pending petitions infructuous.

To this, the bench said even if the House is dissolved, "we can still set the things straight if we agree with you. And if we don't agree with you, things will be as it is."

Both Nariman and Sibal contended that how can a governor who is a party in the case, can swear in a new chief minister who is Congress party leader without any communication from the party appointing him as the leader.

Sibal further said that at 6.30 pm last Friday, President's rule was revoked in the state and at 10 pm the new chief Minister was sworn in and observed that during this period there was no government in the state.

"During proclamation, the assembly is in suspended animation and once the proclamation is revoked, a government has to take its place. Here the constitutional provisions were violated as there was no government for 3.30 hours," he said.

The bench, however, said it will take up this matter after it closes the case concerning discretionary power of the governor.

Senior advocate T R Andhyarujina appearing for governor J P Rajkhowa, while concluding his arguments in the case, said he had acted under his discretionary power to advance the session of the House.

He claimed the governor was assaulted by two ministers of the Nabam Tuki government and abused by the Congress party leaders at his house.

The bench then said that according to it, tentatively, everything will go if it did not agree with the contentions of governor and rebel MLAs, and if it agrees, then everything will be as it is. Andhyarujina said discretion is not written in a hard and fast manner but it is a power which the governor can use in the right way.

The apex court had on Friday rejected the plea of Congress leaders seeking an interim direction that it be allowed to go for a floor test in the Arunachal Pradesh assembly to prove majority.

The Congress, which has 47 MLAs seats in the 60-member assembly, suffered a jolt when 21 of its lawmakers rebelled. Eleven BJP MLAs backed the rebels in the bid to upstage the government. Later, 14 rebel Congress MLAs were disqualified.

Hours after the union cabinet had decided to recommend revocation of President's rule in Arunachal Pradesh, the apex court had on February 17 ordered maintenance of status quo in the politically fragile state till it examined judicial and assembly records on disqualification of the 14 rebel Congress MLAs by former speaker Nabam Rebia.

On February 16, the court had also refused to pass an interim order on a plea of Congress leaders that Arunchal Pradesh governor Rakhowa be restrained from swearing in a new government in Arunachal Pradesh. 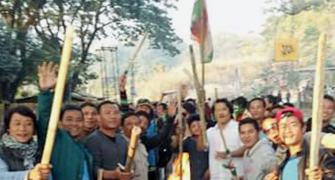 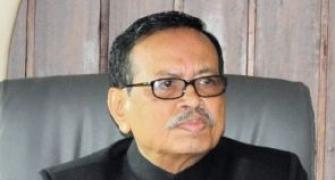 SC clears decks for formation of new govt in Arunachal 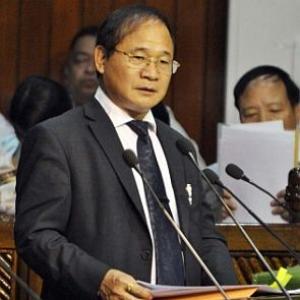