Pulwama-like attacks can happen: Imran Khan on scrapping of Art 370

Pakistan Prime Minister Imran Khan on Tuesday expressed apprehension that Pulwama-like attacks can follow the revocation of the special status for Jammu and Kashmir, which could trigger a conventional war between Pakistan and India. 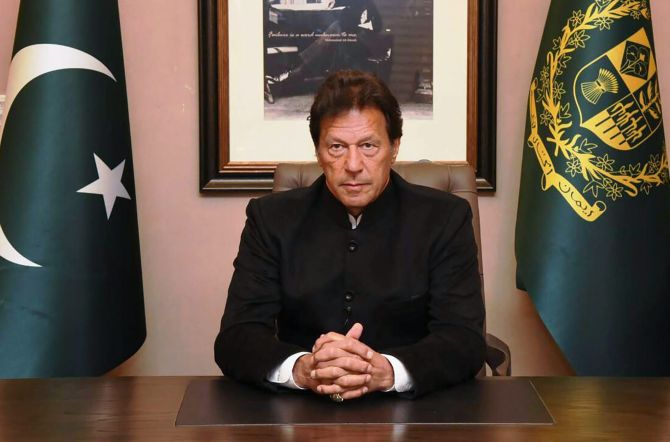 "This will be a war that no one will win and the implications will be global," he warned while addressing a rare joint sitting of Parliament that was convened to discuss the Kashmir situation, a day after the Indian government revoked Article 370 which gave special status to Jammu and Kashmir.

India maintains that Jammu and Kashmir is its integral part and it includes Pakistan-occupied Kashmir.

Khan explained how the war-like scenario could erupt in the middle of the current tensions between the two nuclear-armed neighbours. He said Kashmiris would protest and India would launch a crackdown on them.

Khan said with this approach, "Attacks like Pulwama are bound to happen again. I can already predict this will happen. They will attempt to place the blame on us again. They may strike us again, and we will strike back."

"What will happen then? Who will win that war? No one will win it and it will have grievous consequences for the entire world. This is not nuclear blackmail," Khan told the lawmakers.

He urged the international community to take notice of the situation in Kashmir.

"What they did in Kashmir is in accordance with their ideology…They have a racist ideology," Khan alleged. "Theirs is the ideology which killed Mahatma Gandhi. If the world does not act and does not uphold its own laws then we will not be responsible."

Khan said that his government would approach the world leaders and apprise them of situation in Kashmir.

"We will fight it at every forum including the UN Security Council," he said, adding that Pakistan also plans to take the matter to the International Court of Justice.

Khan said that he tried to improve ties and all neighbours, including India, but New Delhi refused to respond to his overtures.

"When I first reached out to India, they expressed concerns that there were militant outfits operating from Pakistan. I told (Narendra) Modi that after the grave and painful tragedy of the Army Public School massacre, all our political parties had resolved to never let the territory of Pakistan be used for terrorist activities.

"But I got the feeling that the Indian side was not serious about talks. When we went to Bishkek (for the Shanghai Cooperation Organisation summit), my suspicions regarding their unwillingness to speak was strengthened," Khan said.

He said that India "took our overtures for peace as weakness, so we stopped extending offers to hold talks".

Shehbaz earlier said that Khan should use his leadership to lead the case of Kashmir at this critical juncture.

Earlier, the joint sitting was marred due to differences between treasury and opposition over language of resolution against India.

After the start of the meeting, Minister for Parliamentary Affairs Azam Khan Swati presented the resolution, condemning "violation" of the Line of Control by India, but it did not mention the revocation of Article 370.

Opposition lawmakers staged protest at the omission and threatened to boycott which prompted National Assembly Speaker Asad Qaisar to adjourn the session with the promise to reconvene shortly after amending the resolution.

The session was convened after four hours when Pakistani's Prime Minister Khan agreed give a policy statement.