Armed with SC nod, Azad 'to reach out to J-K people' 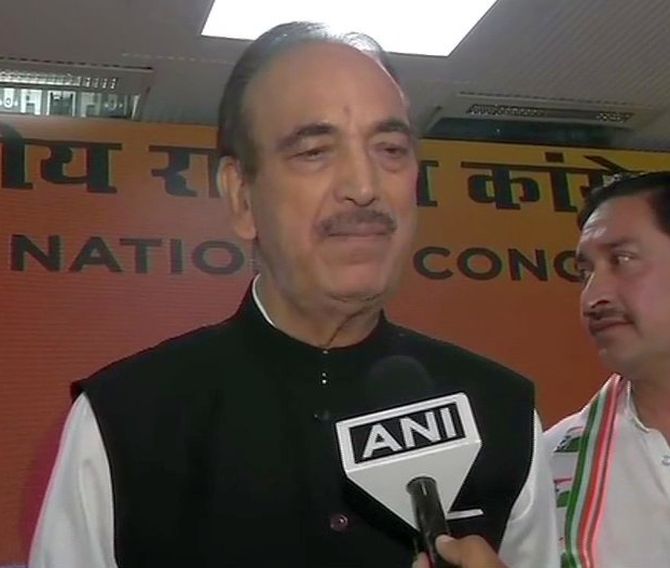 Congress leader Ghulam Nabi Azad, who has been allowed by the Supreme Court to visit Jammu and Kashmir, on Monday said it will be a ‘humanitarian’ trip to reach out to common people and he will submit a report to the apex court on his return.

Azad also accused the state and Centre of not being bothered about the people.

Azad said he is concerned about lines of communication disrupted in Jammu and Kashmir, but is more worried about the common people and how they are earning a living.

"For those lakhs of people, I had put in this request because the state government has put all representatives, party leaders from Kashmir Valley and also in Jammu under detention," he said, asserting that no BJP leader had been detained.

"They (politicians) cannot raise their voice so who will speak for the people. The government is not bothered about this section, so I put in the request before the Supreme Court," the Leader of Opposition in Rajya Sabha told reporters.

He said he had made efforts to visit Jammu and Kashmir but was sent back both from the Srinagar airport and the Jammu airport.

"I have mentioned in the petition that I am not going to meet family members. I will visit Kashmir on a humanitarian basis," Azad said.

"I am thankful to Supreme Court for permitting me to travel to Srinagar, Baramulla, Anantnag and Jammu districts. Whatever report I get from there I will present it before the Supreme Court and probably then they can tell the government if there is a way to arrange for food for these people," he said.

Earlier, a bench headed by Chief Justice Ranjan Gogoi and also comprising justices S A Bobde and S Abdul Nazeer, was told by senior advocate A M Singhvi, who was appearing for Azad, that he wants to meet the people and inquire about their welfare.

Singhvi said Azad had tried to visit the state thrice, but was turned back from the airport.

Azad, who has filed the petition in his personal capacity, had said on Sunday that it was ‘apolitical’.

In his plea, Azad has also sought a nod from the top court to visit his family members and relatives.

In his petition before the top court, Azad has also sought permission to check on social conditions after a clampdown was imposed by the authorities following the scrapping of the state's special status.