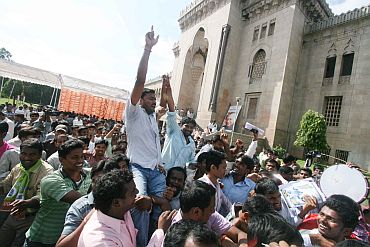 Osmania University campus, the hub of the pro Telangana agitation in the recent months, burst in to celebrations on Friday afternoon after the Andhra Pradesh government gave in to the students' demand and postponed the written examination for the recruitment of police sub inspectors throughout the state.

However, university campuses across the Andhra and Rayalseema regions reacted angrily to the decision. While the hundreds of students came out on the streets to protest against the postponement of the examination, Andhra-Rayalseema Joint Action Committee has given a call for bandh in the two regions on Saturday. However, the Telangana bandh called by the Telangana Rashtra Samiti in protest against the examination was called off after the government came down.

Andhra Pradesh Home Minister Sabita Indra Reddy announcing the postponement of the examination told mediapersons, "As a responsible government we had to respect the sentiments of the people of all the regions. We have decided to postpone the exam to maintain law and order and peace in the state."

She said that the government including Chief Minister K Rosaiah made every possible effort during the last four days to assure the students of Telangana that no injustice will be done to them in the written examinations.

"But we failed to convince them and in view of their strong sentiments the examinations have been postponed," she said.

They are against the controversial clause as it gives Hyderabad the status of a 'free zone' where any body from the state can apply for a police job while pro Telangana organisations want that all such jobs in Hyderabad should be only for the people of Telangana.

The written test was scheduled for December 18 and ever since Chief Minister K Rosaiah had announced three days back that the government will go ahead with the examinations as per schedule, the protests had taken a violent turn.

Osmania University campus was tense on Friday after Thursday's violence between the police and the students.

While the postponement of the examinations brought cheers to the students in Osmania campus and they celebrated it by taking out 'victory procession,' anger and tension prevailed in Andhra University in Visakhapatanam, Srikrishna Devaraya University in Anantapur and Sri Venkateshwara University in Tirupati.

Students held rasta roko and burnt the effigies of K Rosaiah condemning him as the "Chief Minister of Telangana". In Visakhapatanam students forcibly closed the shops and stopped the traffic on the roads.

The Joint Action Committee of Andhra and Rayalseema has given a call for strike in the two regions on Saturday in protest against the decision. They have also demanded the resignation of the MLAs and MPs from their regions.

Meanwhile, TRS president K Chandrasekhar Rao said that after the decision of the government to postpone the exam there was no need for any strike in the region on Saturday.

He urged the CM to lead an all-party delegation to New Delhi to impress upon the Central government to delete Clause 14(F) from the presidential order. 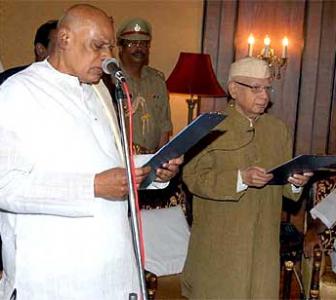 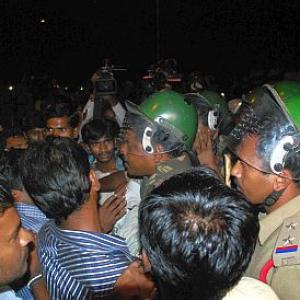