Claiming that the Andhra Pradesh government has been reduced to minority, the Jagan camp on Saturday dared Chief Minister N Kiran Kumar Reddy and his cabinet colleagues to step down from their posts and seek a fresh mandate.

"We are ready to quit our posts if you and your Cabinet colleagues do so. We shall all go to the people to seek a fresh mandate. We will campaign with late Chief Minister Y S Rajasekhara Reddy's pictures and you use only Sonia's. Let us see who wins," Congress MLA Chandrasekhara Reddy said, addressing a massive protest programme organised by Jagan on the Ramakrishna beach road in Visakhapatnam on Saturday evening.

He, along with fellow legislators Balineni Srinivasa Reddy, Pilli Subhash Chandra Bose and others, were reacting to the chief minister's remarks in New Delhi on Saturday that those MLAs siding with the rebel leader (Jagan) should resign and seek a fresh mandate.

They also lashed out at the chief minister for terming the MLAs' support to Jagan as "immoral".

Jagan criticised N Kiran Kumar Reddy, saying that the latter was concerned only about securing his position rather than addressing the people's concerns.

Pointing out that the Kiran Kumar Reddy's government has been reduced to a minority, Anakapalle MP Sabbam Hari, former MLA Ambati Rambabu and others targeted the chief minister saying he has failed to check spiraling prices of essential commodities.

"He has not conducted a single meeting with his Cabinet colleagues to discuss the price-rise issue and the steps to be taken to check prices," they criticised.

A handful of MLAs and the Anakapalle MP accompanied Jagan on the six-hour 'Jana Deeksha', organised in protest against the hike in petrol price and rising prices of essential commodities.

Jagan Reddy said petrol and diesel prices were increased 20 times in as many months despite the fact that oil companies were making a profit of Rs 1.26 lakh crore in the last four years.

Prices of essential commodities have sky-rocketed due to this, making life miserable for the common people, he added. 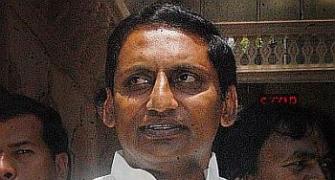 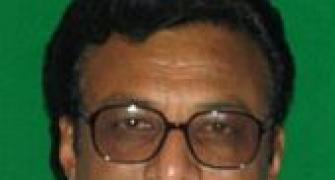 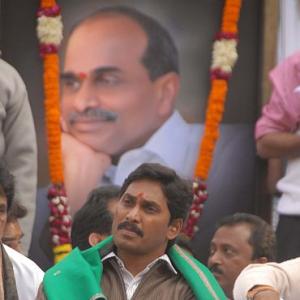 'I did a favour to Cong by not toppling AP govt'