A visit to Jamia Millia Islamia where students and others have been sitting in protest against the Citizenship (Amendment) Act has convinced him he is 'alive', an impassioned Anurag Kashyap said on Friday. 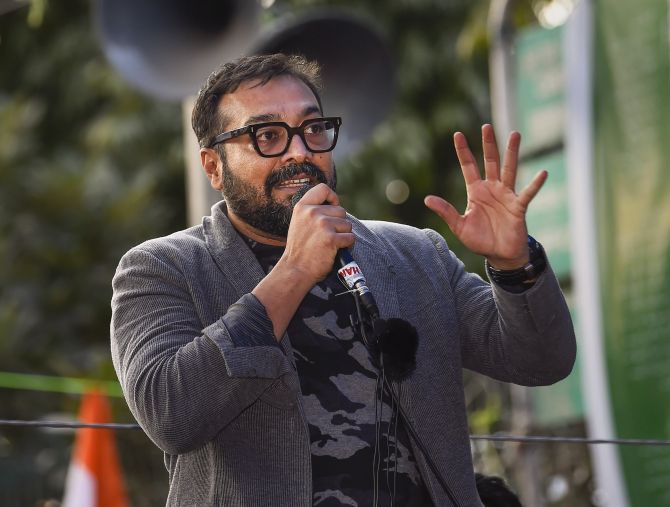 The filmmaker, at the forefront of the criticism against the amended citizenship act, assured the students that he and many others stood behind the students in their long fight.

"I have come here for the first time. If we talk about the time before the past three months, I used to believe that we are finished and dead... but coming here today I'm convinced we are alive," Kashyap told the gathering.

The fight, he said, was to 'take the constitution, country and everything' back.

"This is a very long fight. It won't end tomorrow, the day after or with the next election. But you need to have a lot of patience for this. They are waiting for people here to get tired and go home. So we need to have patience and stick to your ground," he said.

The outspoken director of films such as Gangs of Wasseypur and Dev D, who also went to Shaheen Bagh, the epicentre of the anti-CAA protest, said people in power are waiting for the protesters' spirit to weaken.

"We have to be patient and sit in protest till you don't come and answer all the questions that we have in our hearts to our satisfaction. We will not believe everything you say," he said.

The students of Jamia are also protesting against what they term repeated instances of alleged police brutality. 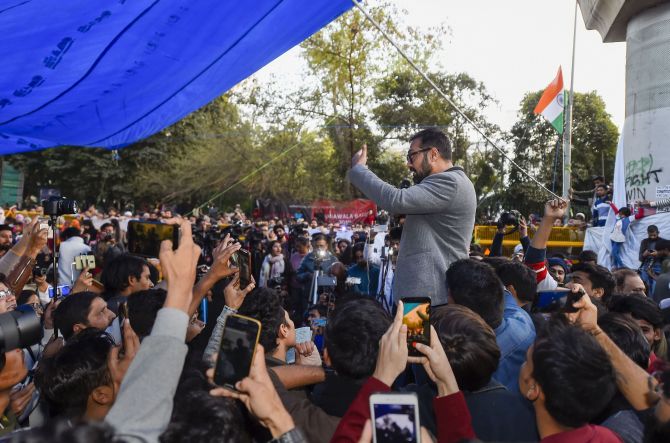 On February 10, they alleged, police personnel kicked them on their private parts, tore their hijabs, questioned their patriotism and abused them when they tried to march to Parliament on February 10 against the CAA and the NRC.

Kashyap said he had left Twitter but returned to it in December after police allegedly attacked students and entered the Jamia campus.

"I had left everything and went away but I changed my mind after what happened in Jamia in December. I saw a video of a girl and that gave me courage to return to Twitter. Now I will not stay silent," he said.

What started in Jamia has spread to different parts of the country, the director said.

"Everyday I read stories and watch videos about you people. This gives me strength. What is happening gives us the understanding and strength that we have an existence," he added.

Kashyap, who has been speaking out on Twitter and other platforms, joins personalities from the film industry such as Swara Bhasker and Mohammed Zeeshan Ayub who have not just voiced their opinions on social media but also been on the ground in Delhi and Mumbai to speak to the protesters.

Kashyap also joined the protesters at Shaheen Bagh on Friday. 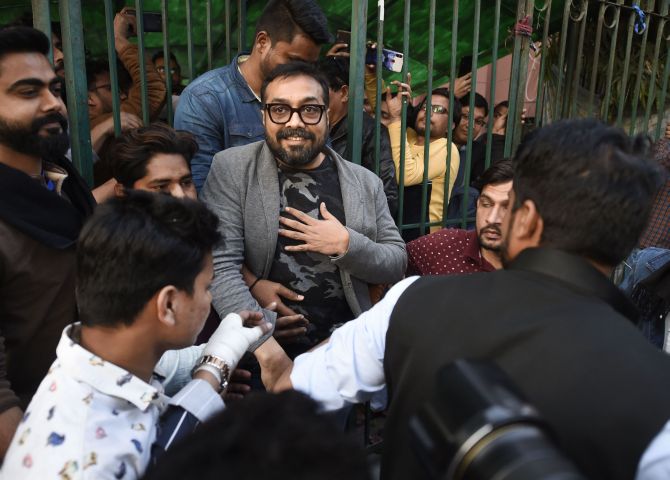 He met the famed Dadis of the protest and also relished some biryani -- the famous dish that has become a subject of contention between those in favour of and opposed to the CAA and NRC across the country.

Kashyap took to the stage and asked protesters to not give any reason to those in power to evacuate them from the site.

"When you fight for your rights, it is important that you stick with your truth. Don't give them any chance that they can violently remove you from here… They do not understand the language of love. This is the only way to fight with them because they themselves do not know what they want," he said.

He also took potshots at Home Minister Amit Shah during his speech, saying he personally would not believe whatever the government claimed about the CAA.

"If we are misinformed, come and explain it to us," Kashyap said, hailing the protesters for continuing the demonstration which started on December 15.

Meanwhile, protesters at Shaheen Bagh on Friday paid homage to Pulwama martyrs and observed a one-minute silence for the soldiers as they continued their demonstration that is now in its third month.

School children presented dance performances on patriotic songs as the hundreds of people gathered there extended their respects to the 40 Central Reserve Police Force (CRPF) personnel who were killed in a terrorist attack on the Jammu-Srinagar highway at Lethpora in Pulwama on February 14, 2019.

Protesters at south-east Delhi's Shaheen Bagh, which has now become symbolic of the resistance against the Citizenship (Amendment) Act and the National Register of Citizens (NRC), had on Thursday extended an invitation to Prime Minister Narendra Modi, inviting him to come and celebrate Valentine's Day with them.

Sonu Warsi, a protestor, told PTI, "Around 4 pm, scores of children performed on patriotic songs and we paid tributes to the Pulwama martyrs with the national anthem. A one-minute silence was observed later in the evening by all present at the site in respect of the martyrs."

Quazi Emad Ahmad, a local, said children and youths rang in the Valentine's Day at midnight, hoping the prime minister would accept their invitation and reach out to them.

Protests had unfolded in Shaheen Bagh, Zakir Nagar, Jamia Nagar, Khureji Khas and other places in the national capital and elsewhere across the country in December to oppose the CAA and the NRC.

According to the CAA, members of Hindu, Sikh, Buddhist, Jain, Parsi and Christian communities who have come from Pakistan, Bangladesh and Afghanistan till December 31, 2014 and facing religious persecution there will not be treated as illegal immigrants but will be given Indian citizenship. The law excludes Muslims.

Those opposing the law contend that it discriminates on the basis of religion and violates the Constitution. They also allege that the CAA along with the NRC is intended to target the Muslim community in India.

However, the central government has dismissed the allegations, maintaining that the law is intended to give citizenship to persecuted people from the three neighbouring countries and not to take away citizenship from anyone.

IMAGE: Writer-director Anurag Kashyap at Jamia during a protest against the new citizenship law (CAA) and National Register of Citizens (NRC) in New Delhi, on Friday. Photograph: Kamal Singh/PTI Photo
© Copyright 2020 PTI. All rights reserved. Republication or redistribution of PTI content, including by framing or similar means, is expressly prohibited without the prior written consent.