The phase three clinical trial of the antiviral drug remdesivir, led by a team of investigators including an Indian-American physician, for the treatment of the coronavirus patients has shown positive results, a United States pharma company announced on Wednesday. 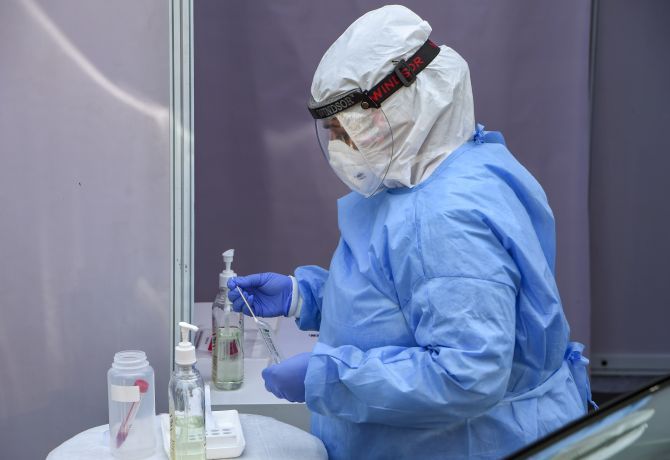 The California-based pharma company Gilead Sciences said that the preliminary results showed that 50 per cent of the COVID-19 patients treated with a 5-day dosage of remdesivir improved and more than half were discharged from the hospital within two weeks. A phase three clinical trial is said to be the final step in the process of the drug approval.

"Certainly, it's a positive it's a very positive event," Trump told reporters in response to a question on the latest result of the clinical trial of remdesivir.

The White House described the development as "quite good news".

The pharma company also said that it is also aware of positive data emerging from the National Institute of Allergy and Infectious Diseases' study of the investigational antiviral remdesivir for the treatment of the COVID-19.

"We understand that the trial has met its primary endpoint and that NIAID will provide detailed information at an upcoming briefing," it said.

Remdesivir is not yet licensed or approved anywhere globally and has not been demonstrated to be safe or effective for the treatment of the COVID-19.

The study sought to determine whether a shorter, five-day course of remdesivir would achieve similar efficacy results as the 10-day treatment regimen used in multiple ongoing studies of remdesivir, the company said.

"These data are encouraging as they indicate that patients who received a shorter, 5-day course of remdesivir experienced similar clinical improvement as patients who received a 10-day treatment course," said Aruna Subramanian, MD, Clinical Professor of Medicine, Chief, Immunocompromised Host Infectious Diseases, Stanford University School of Medicine, and one of the lead investigators of the study.

"While additional data are still needed, these results help to bring a clearer understanding of how treatment with remdesivir may be optimised, if proven safe and effective," Subramanian said.

Dr Anthony Fauci, a key member of the White House coronavirus task force, told reporters at a media briefing with Trump that Gilead results from the remdesivir clinical trial for treating the disease showed "quite good news".

"So that's something that will go with 31 per cent improvement, doesn't seem like a knock out, 100 per cent, it is a very important proof of concept," Fauci said.

"This is very optimistic, the mortality rate trended towards being better in the sense of less deaths in the REM designate group. Eight per cent versus 11 per cent in the placebo group. So bottom line. You're going to hear more details about this this will be submitted to a peer reviewed journal, and will be peer reviewed appropriately," said Fauci.

In an earlier interview to Stanford Medicine, Subramanian said that during normal times, a phase three clinical trial typically takes months of planning, after years of research before it is underway.

"But these aren't normal times. With a fast-moving pandemic bearing down and no approved treatments available, researchers are, like everyone else, desperate for answers, and they have ramped up their efforts to find solutions. Remdesivir jumped to the top of the list of potential treatments in part because it was farthest along in the approval process," Subramanian said.

By the end of February, as the virus spread in the United States, there were at least five clinical trials of remdesivir underway.

China initiated the first two studies in February, followed later that month by the Gilead trials for severe and moderate patients and the NIH trial. By the end of March, Gilead had expanded to 100 testing sites both in the United States and abroad, and the NIH trial had expanded to 60 sites, 50 of those in the United States, Stanford Medicine reported.

A coronavirus infection occurs when the germ enters the body's airways through the nose, mouth or eyes, then lodges in the cells in the lining of the lung's airways, where it quickly starts to make millions of copies of itself, wreaking havoc on the lungs, Subramanian told the Medical publication.

The virus makes copies of itself by inserting its own genes into the human cell's genetic machinery, basically hijacking the replication process of the human cell.

Remdesivir, like other anti-virals, is designed to target the system the virus uses to replicate, acting as a cap that prevents the virus from making new copies of itself or infecting other cells, she said.