1984 anti-Sikh riot culprits must be punished irrespective of identity: Rahul

'Prime Minister Modi doesn't talk to me. He meets and says in monosyllables'

'The Supreme Court, the Reserve Bank of India, the Election Commission of India have knowledge that no one has. Listen to them, respect and allow them space. Those are India's assets, not liabilities.' 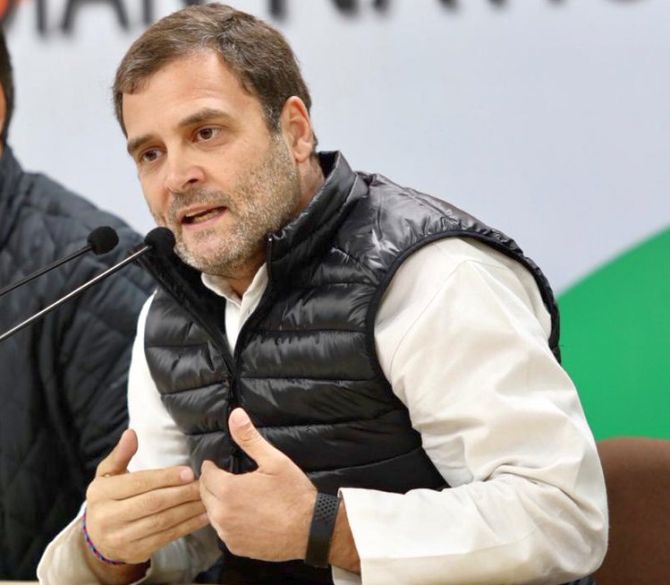 "I am very clear on 1984 that anybody, regardless of where he comes from, if he has harmed members of the minority community, he should be punished," asserted Congress president Rahul Gandhi while speaking about alleged insecurities among minorities in the country.

In an exclusive interview to Gulf News, ahead of his maiden visit to UAE, the Gandhi scion said, "We will punish those who think that they can get away by crushing India. They should not be under the impression that they can crush the weak people. I am very clear on 1984 that anybody, regardless of where he comes from, if he has harmed members of the minority community, he should be punished. The legal system will make sure that the justice is done (in 1984 cases) and we will allow the justice system to work. The legal structure that we have, the laws that we have, are good enough to deal with the problems as long as institutions like the Supreme Court are free to do their work."

While talking about alliances for 2019 Lok Sabha election, Rahul exhumed confidence about party's ability in Uttar Pradesh and said that the Congress will surprise people in the state.

"Our first aim is to defeat Prime Minister Narendra Modi. There are states where we are very strong and we are the primary party and are contesting the BJP directly. There are states where there are possible alliances -- Maharashtra, Jharkhand, Tamil Nadu, Bihar, where we are working out an alliance formula. There are very interesting things that the Congress party can do in Uttar Pradesh... the Congress idea is very powerful for Uttar Pradesh. So, we are very confident of our ability in Uttar Pradesh and we will surprise people," said Rahul to the Gulf News editor, who came to Delhi for Rahul's interview.

The Congress president also said that work is in progress to bring opposition together in the Uttar Pradesh and added, "I have heard some statements in the media but we are going to work together and make sure that we defeat Prime Minister Modi. But, I just want to say again -- to underestimate the Congress in UP is a mistake."

Acknowledging the defeat of 2014 Lok Sabha election, Rahul also talked about having fatigue and arrogance in the party after being in power for ten years.

"You can understand that we were ten years in power and frankly there was a certain amount of fatigue, a little bit of arrogance built up and that harmed us," he said.

The Congress president also opined that party's model for 2019 is to bring people into the conversation and listen to what they are saying.

Accusing the government of destroying the institutional structure of India, Rahul also called for 'allowing them space' to function.

He said, "Prime Minister Modi doesn't have respect for experts and he believes that he is the centre of all knowledge. Respect, knowledge and understanding. An institution is a reservoir of knowledge; respect the people in that institution. The Supreme Court, the Reserve Bank of India, the Election Commission of India have knowledge that no one has. Listen to them, respect and allow them space. Those are India's assets, not liabilities."

While speaking about his personal life, Rahul categorically denied any thought about marriage in the near future and said that as of now he is entirely focused on the political front.

"Right now my single-minded focus is that we are fighting an ideological war, we have to make sure that Prime Minister Modi and the RSS do not continue to have their hold on Indian institutions. I like to operate in the present. and right now the present is that there is a political fight taking place. We are working with our allies, making sure that they present a solid narrative and we are putting in place the pieces that are going to defeat the Prime Minister," said Rahul to Gulf News.

During the interview Rahul also outlined the absence of direct communication between him and the prime minister and said, "Prime Minister Modi doesn't talk to me. He meets and says in monosyllables. He will say 'hello'. The biggest gift that Prime Minister Modi has given me is that I listen now, I listen very deeply."

Gandhi is currently in Dubai for two-day visit to the United Arab Emirates.

He will be interacting with the Indian overseas community and the student community.