In a first, the Central Reserve Police Force has sent over 50 of its young officers to train with operational army units in order to hone their skills in tactical manoeuvres and counter-insurgency operations.

The decision to attach officers in the rank of assistant commandants, deputy commandants and commandants with the army for better training and understanding of counter-insurgency operations was taken by the Cabinet Committee on Security (CCS) in the aftermath of the deadly Dantewada Naxal ambush where 76 CRPF personnel were killed.

The latest officers' batch of about 53 Directly Appointed Gazetted Officers of the CRPF has been attached with various army units in the country, including with the Rashtriya Rifles unit operating in the Kashmir Valley.

The officers had joined the Central Reserve Police Force as assistant commandants in January after a gruelling 55-week training, including a special module in 'jungle survival course'.

"The CCS had decided that the cutting-edge of CRPF officers and commanders should have an exposure with the operational army units. The young officers are undertaking patrols, ambushes and tactical courses with these units in various parts of the country, from anti-militancy in Kashmir to counter-insurgency in the Northeast," a senior CRPF officer said.

The CRPF, which has deployed close to 76,000 personnel for anti-Naxal operations, had faced a big setback during the April 6 Dantewada ambush in Chhattisgarh last year and a number of measures were taken after the incident to equip the force to take on the Maoist challenge.

The CRPF officers will also get to understand the nuances of leadership and commandeering qualities during their three-month stint with the army, the officer said.

Women CRPF officers, however, have been kept away from this stint.

Few officers, however, feel the CRPF itself has trained these young officers in all the operational theatres it is working in and the army stint is unnecessary for them.

"These young boys have been trained in the theatres of anti-Naxal and counter-insurgency offensives by CRPF trainers who have gained expertise on the subject since a long time. So a deputation with the army will not add much to the capabilities of these officers," a senior officer said.

The CRPF is also in the process of inducting more than 2,000 former army personnel in one go to bolster its anti-naxal operations, offering them a salary of up to Rs 55,000 per month. 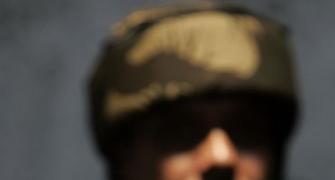 J&K: Jihadi infiltration on a low, claims army
No PM, no Pranab. Who'll run the govt from Sep 21?
Woman killed in crossfire in J&K Calm in the Valley is the silence of the graves: Geelani