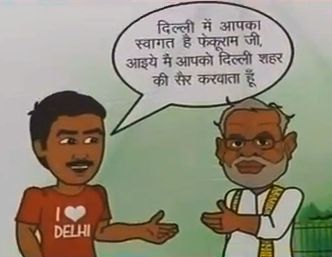 As the Bharatiya Janata Party was all geared up for Narendra Modi's rally in the national capital on Sunday morning, a pre-emptive tirade against the Gujarat leader was launched with pamphlets, dubbing him as 'Feku', circulated through newspapers.

The pamphlets and hoardings, mocking Modi's visit to city as 'Aaya Aaya Feku Aaya', compared development parameters of Gujarat and Delhi and put the latter way ahead. These posters did not mention name of any political party.

The BJP outrightly put the blame on Congress and alleged that this "mischief" has a set a bad example for political culture. Former BJP president Nitin Gadkari said that the Congress is afraid of Modi's leadership and this reflects their restlessness.

"It is very sad to see the way members of Congress party have put up posters against our leader Narendra Modi. It is a matter to ponder what sort of political culture we are setting up. This sort of behaviour is not good for democracy.

"The BJP has never said such thing about Sonia Gandhi and Rahul Gandhi whenever they go anywhere," said Gadkari during the rally at Japanese Park in Rohini today.

Why there is restless among Congress? The reason is that they are afraid of Modi's leadership, said Gadkari. In these posters, a comparison was made between Delhi and Gujarat. Comparisons related to transport, pollution and economic prosperity between the two states were made and Delhi was shown above in all the categories.

It was stated in the posters that CNG has made Delhi beautiful whereas Gujarat suffers from pollution. Delhi has been portrayed as a city for common people while Gujarat is the only city for industrialists.

The BJP has labeled Modi as 'Bharat ma ka sher' through its posters.