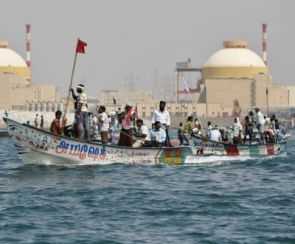 Reviving their anti-nuclear stir, leaders of People's Movement Against Nuclear Energy on Friday began an indefinite fast at Idinthakarai to press for implementation of some of their demands including scrapping plans to set up units 3 and 4 of Kudankulam Nuclear Power Plant.

Udayakumar and M Pushparayan along with five others are on an indefinite fast at Idinthakarai, the epicentre of PMANE's protest in Tirunelveli district.

Their demands include scrapping plans to set up units 3 and 4 of Kudankulam Nuclear Power Plant, publishing information on the standard of equipment installed in KNPP and honouring the Central Information Commission's order to make public the Site Evaluation Report, Safety Analysis Report and VVER Reactors Performance Report.

They also demanded revocation of over 360 cases filed against over 2.7 lakh protestors.

PMANE also charged Congress, which opposed dumping of nuclear waste at Kolar in Karnataka, with remaining silent on the Kudankulam issue and said parties like Bharatiya Janata Party, Communist Party of India-Marxist and CPI are not for the welfare of the Tamils.

"Parties like Marumalarchi Dravida Munnetra Kazhagam, Manithaneya Makkal Katchi, which supported us earlier are now remaining silent, since they are having alliance with big parties," they said.

The unit attained criticality in July last year after much delay, largely due to protests against the project by anti-nuclear activists, spearheaded by PMANE, in areas around the complex, citing safety reasons.